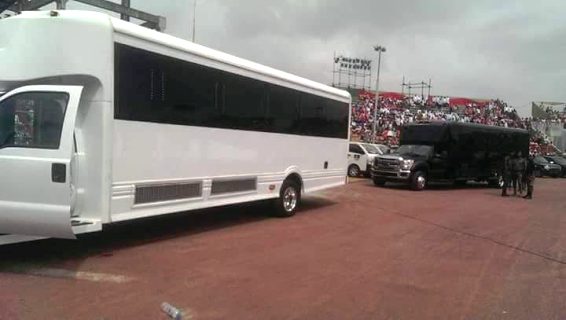 The President-General of Save Rivers Movement, Charles Aholu has accused Rivers state governor, Nyesom Wike, of spending N300 million to purchase two bulletproof 'mobile offices'.Aholu who is also a lawyer,Aholu made the allegations in a Facebook post on Monday February 29th.Governor is yet to react to this allegation.

Below is what Charles Aholu wrote.


YOUR EXCELLENCY, WHAT IS THE COST OF YOUR LATEST SWAG?
Dear Sir,
I write you this letter as a concerned indigene of our beloved Rivers State. I did not set out to write because like other eletronic vuvuzelas, I desire to scout for cheap popularity. Trust me, my intentions are quite noble. I may be unable to unlace your sandals, but I am sure that I can draw your attention to those matters which merits your commendation and condemnation, so that your appetite for princely robes, real estates, automiles and bank-breaking acholic beverages can be put in check.
Please sir, don't be mad at me for revealing the golden nature of your taste. It is not in doubt that you are a man with a grand appetite for grandeur. that is not a secret at all. From your acquisition of choiced properties during your reign as Chief of staff to your former boss now turned enemy, to your accession to the laudable comforts of porsh automobiles, you have displayed an affection for luxury worthy of emulation by aspiring politicians who see you as a role model.

But my worry sir, is that you have decided not to put your taste for these automobiles in check. I recently heard that you acquired two bullet proof mobile offices reportedly worth three Hundred million naira (N300, 000, 000. 00).

If my records serve me right, you are the first governor to have purchased these luxury mobile offices in Nigeria. I know that by this purchase, you have shot Rivers State into the exclusive class of States in the world with a world class throttling office good enough to feed several families and for which great operational expenses would be incured. Bravo sir! Your swagger and 'prudence' are worthy of emulation.
What defies wonder is that you chose to buy two (2) of these sexy automobiles at a period of auterity and great economic strain when your government has for the same reason, discontinued the Rivers State Oversea Scholarship for want of funds. That you chose to purchase these offices at a period when salaries are yet to be paid and when the dollar is sky-high for want of local investment is a testimonial of your 'frugality and great economic marks-manship. You are indeed a modern wonder!

Please sir, permit me to ask you just one or two questions. What is the cost of this your recent swag? I hope the amount will not be eshrouded in mystery? I hope it will not suffer the Same fate as the 2016 Appropriation Bill which has remained a privately classified document?
Let me congratulate you once again for inflicting your kingly taste on the good people of Rivers State. You have proven yourself a good son worthy of emulation and have broken every record of economic frugality in an era of austerity.
Please accept my warmest regards!
Yours Sincerely,
Aholu Charles C.
Cc: Wailing Waillers