Story of the Bini Church... 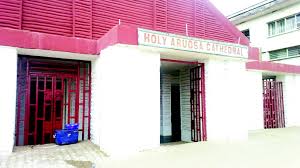 Holy-Aruosa Cathedral Church: Oba Of Benin Is General Overseer
On Akpakpava Road in the heart of Benin City, the Edo State capital, is a church founded over 500 years ago. The architectural design of the building tells its story. It does not advertise itself; yet has a large following. The Oba of Benin is its spiritual head, reports Osagie Otabor.

The Holy Aruosa Cathedral is to the Bini people what the Church of England is to the English people; no wonder it is referred to as the Church of Benin.
Welcome to the Holy Aruosa (the eye of God) Cathedral. Members of the Holy Arousa are different from flocks of other religious bodies: they are seldom seen sharing pamphlets to convert members or inviting people to the church. The church leaders do not hold crusades or revival services to convert ‘souls’, neither do they invite people to experience miracles.

Legend has it that the church was located at the place because it was the spot the Bini had direct contact with Osanobua (God) long before the coming of the European explorers and missionaries. According to the folklore, a powerful spiritual leader known as Okhuaihe was said to have offered to
personally take the peoples’ plea to God as a result of drought and pestilence that had infected the land. He gave up his life during one of the prayer sessions. He was expected to return and bring succour to the people.

As the story goes, the people continued their prayers waiting for Okhuaihe’s return but rather than his return, they got a huge fireball that descended from the sky. At the point where the ball of fire dropped, a huge black stone was found and a place of worship was built there.

During the British invasion of Benin Kingdom, the church was destroyed and the black stone was carted away along with other artifacts from the ancient city at about 1897. The invaders came with their own God, mode of worship and forbade the people from worshipping Osanobua at Holy Arousa.
It was Oba Akenzua II (father of the present monarch) who rebuilt the current cathedral, not only in Benin City, but in Onitsha, Umuahia and other
areas.

The Oba of Benin is the spiritual head (general overseer) of the Church. His deputy is the Benin Crown Prince. The presiding head of the church is
known as ‘Ohen Osa’ (God’s servant). A special seat is reserved for the Oba at the church. The priests dress like the Roman Catholic priests and usually wear red caps.

Service at the church is conducted in Bini language. The Holy Bible is not used in the church; much of the preaching revolves around reminding the
congregation that the Oba is God’s representative on earth and on the need to be good while on earth. Baptism of new converts is done with the white chalk (Orhue) in what is regarded as ‘Igborhe’.

Does miracle happen in the church? Ohen Osa Harrison Okao said people received miracles and God’s blessings directly from God without any
intermediary. He said: “Those who seek God come here. We don’t beg people to come. If you attend and discover that your contact with God is cordial, you will remain. If you beg God for promotion and you come here and got it, you will remain here.”

Harrison said the church was founded during the reign of Oba Esigie and to worship God without praying through any intermediary.
He said: “We use our local language to communicate with our God. We are aware of other diverse ways of reaching God. If you are a good Muslim, God will accept you. If you are a good Christian, God will accept you. “We don’t use the Bible here. We have our own book. We use the book of Holy Arousa according to the sayings of the ancient belief written by the wise men.

The church is still in existence till today, it is an entity that will last forever. Nothing can stop it. A professional doctor does not need sign board.
Oba is a special human being. He is God’s representative on earth. The seat that concerns Omon N’ Oba, nobody can sit on it. That seat is
exclusively preserved for him.”