Doctors Have Warned Women Against Eating Their Placenta 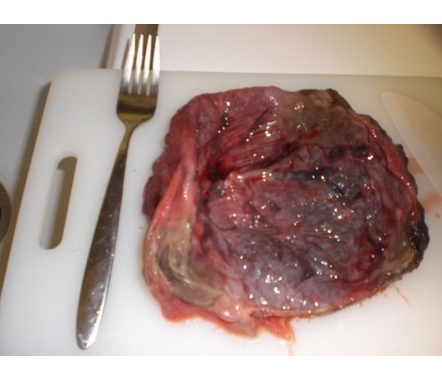 Placentophagy is the act of mammals eating the placenta of their young after childbirth. The placenta contains small amounts of oxytocin which eases birth stress and causes the smooth muscles around the mammary cells to contract and eject milk.

Many placental mammals participate in placentophagy, including herbivores; exceptions include mainly humans, and some other mammals. Study have shown that some humans eat the placenta of their young after child birth. However, there are no scientific study that proved health benefits of eating the placenta, but a survey was conducted by American Medical anthropologists at the University of South Florida and University of Nevada, Las Vegas. Among the participants, about 3/4 claimed to have positive experiences from eating their own placenta, citing "improved mood", "increased energy", and "improved lactation".

The most common placenta preparation is made by steaming and dehydrating the placenta or processing the raw placenta to create a capsule. People have also been known to eat the placenta raw, cooked, or in smoothies or liquid extracts. However, it has been shown that these preparations don't completely destroy infectious bacteria and viruses the placenta might contain.

The Centers for Disease Control and Prevention has thus, warned against taking placenta capsules due to a case in which a newborn developed a group B streptococcus after the mother took placenta pills containing group B strep and breast-fed her newborn. The mother's breast milk was thought to be infected from group B strep bacteria that she acquired after eating her infected placenta. These bacteria can cause serious illness in newborns.

While some claim that placentophagy can prevent postpartum depression; reduce postpartum bleeding; improve mood, energy and milk supply; and provide important micronutrients, such as iron, there are no scientific evidence that backed up the fact that eating placenta provides health benefits.

Several health practitioners have warned that Placentophagy can be very harmful to mothers and their babies and the practice should be discouraged. If any nursing mother is looking for better ways to promote postpartum health, is better to consult the doctor about other proven alternatives.