Meet Tiger - the Cat That Has Been Trending on The Internet 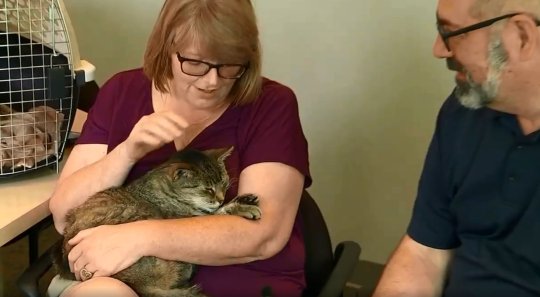 It is said that pets are also as important members of any family. These creatures are not human beings yet they could win a large part of our hearts.

This cat had been reported missing for 11 years ever since he ran away from home at the age of three.... when someone accidentally left the door of the house open. Several months of searching for him yielded no results, and there was no chance of Tiger coming back home.

However, the Maggie Welz family, who were the real owners of Tiger, are extremely happy that once again they've been reunited with their pet...all thanks to another woman Carol O’Connell, who tracked the Maggie's family down through the microchip implanted in the cat.

Carol O’Connell who works for the SPCA (Society for the Prevention of Cruelty to Animals) in Dutchess County, New York, said for the past three years, Tiger has been hanging around her neighborhood, although it was clear that he was a stray. She then tried to get close to him to win his trust, but the cat was too wary to let that happen.

Recently, she noticed that the animal had lost weight and was worried that he might be sick. O’Connell then tried harder to gain the cat’s trust, and eventually, he relented.

She took him in and called him “Ghost” due to his tendency to appear and disappear. On a whim, O’Connell borrowed a scanner from the SPCA shelter and checked the cat. That’s how she found out that his name was Tiger and he belonged to the Welz family.

Maggie Welz says she and her family can finally rest easy, now that their family is all together again. And she then strongly encouraged pet owners to chip their animals in case of emergencies.