Venomous Animals That Could Save Your Life One Day 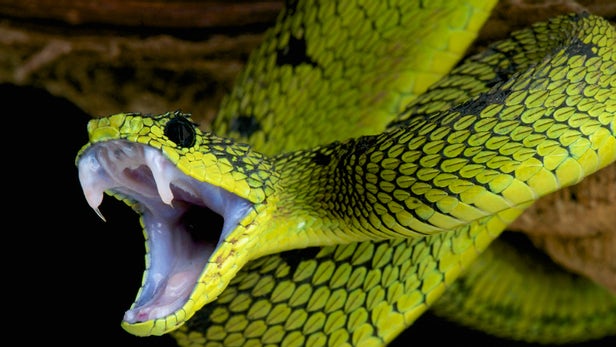 You will agree with me that the most dangerous situations can at times become our saving grace. While some animals can be so cool to play with and can even be owned as pets, others are not so friendly and are totally off zone for many. Venomous animals are creatures that always tend to get a bad rap when we are considering friendly animals, anyway, its has to be like that considering how dangerous these animals can be.

Most venom are weak and slow to act while others are potent and faster than the speed of light. Research have shown that a quarter milligram of some venom is enough to cause a lot of disaster in minutes but the irony is that, that same quantity of venom can also serve as a powerful medicine for saving lives. Science is crazy! don't you think so?

Below are animals with venom strong enough to take a life but at the same time can also be one's saving grace. However, be mindful of them anyway because they can only do this under a strict medical procedure but if by any chance you came across some of them, don't hesitate to hire a jet immediately.

A lot of people hate this eight-legged creepers most especially the annoying web they spin around. But however, we shouldn't judge them strictly with left hands because in a crazy kind of way these creepy animals too deserves some accolades.

Research have shown that spider venom has the ability to treat pains, cancer, muscular dystrophy and some other genetic diseases. Spiders with beneficial venom includes black widow, brown recluse, parson spider and the sac spider. Recent research have also shown that venom from Australia's deadly funnel-web spider could stop brain damage from stroke. Even if you can’t learn to love these annoying creature, you can at least give them a thumb up from a distance.

Cone snails are some of the most toxic animals the world have ever seen. Generally snails are not known to be venomous animals but these specific ones are something else. Cone snails are found predominantly in western Indo-Pacific area, however, some species exist in the Mediterranean and south Africa. Anyone who gets stung by any of these snails and survive after twenty minutes, may likely live forever. Scientist have studied that the venom produced by these animals is hundreds of times more powerful than the effect of morphine. And they are still looking for a way to utilize it in the field of medicine.

Producer of one of the best and sweetest substance that exist in nature and at the same time one of the greatest enemy of man, is the Honey Bee. Where bees are gathered together in one accord is an off zone for many animals, nothing at all have the guts to get close because the aftermath can be very very disastrous.

Evidence have shown that bee venom can also have a positive effect in the long run, it can make one develop a natural immunity towards any future stings. Bee venom had also been proved to treat a variety of diseases and ailments, including arthritis, Lyme disease, eczema, asthma, tumors etc.

This is one of the most terrifying animals known to man yet they are not far from peoples homes. You will agree with me that It is very easy to make friend with a king lion than to get close to a baby snake. The sight of them may either insight scurry or may be a call for war - a lot of people just hate them so much - that is if Indians were not included anyway.

The most venomous snake is the Inland taipan, endemic to semi-arid regions of central east Australia, Its venom is estimated to be toxic enough to kill a minimum of 100 adult men within minutes. Other venomous snakes includes king cobra, black mamba, saw-scaled viper etc. However, while some snakes may be venomous, research have shown that non venomous snakes actually outnumbered the venomous ones.

Snake venom is probably the most understood and is used to treat heart attacks, blood disorders, high blood pressure, minor heart attacks, blood clots, brain injuries and more. The history of using snake venom in medicinal ways can be traced back thousands of years to when Indian and Chinese cultures used cobra venom. Then in the 1960s, Hugh Alistair Reid made a breakthrough. He was a doctor in Malaysia when he discovered that the venom from Malayan pit vipers could help with blood clotting. This great discoveries created an avenue for more discoveries by researchers.