The Only Man On Earth Resistant To Electricity 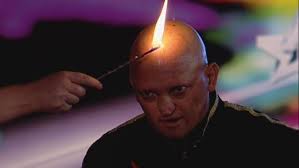 Electricity is a friend of no one except this man, their friendship is really really tight.

Slaviša Pajkić, from Serbia, is known as “Battery Man" due to his amazing ability to withstand high voltage without getting hurt. He discovered his amazing capabilities when he was 17 years old, and ever since then himself and electricity have been best of friends.

Electricity with as little as 50 volts can cause a very disastrous effect on humans and may even lead death, but this man above can take even a lot more and still stay alive. He actually set his first Guinness world record in 1983, when he took a hit of 20,000 volt of electricity as if it was a toast of sandwich. His second record dates back to 2003, when he was able to heat up a cup of water to 97 degrees Celsius, in 1 minute and 37 seconds.

He can light up a bulb, heat a bowl of water, cook any kind of food, by storing or acting as a conductor for electricity. Hitherto, his amazing skills have baffled scientist in recent time without any of them knowing what could be responsible for such superpowers.

However, recently it was discovered that he had no sweat gland or salivary glands that produces fluid through which electricity gets into the body, this was as a result of a genetic mutation.

Anyway he has been using his capabilities to help people suffering from migraine, sinus and back problems. I think he deserves a Nobel Prize. What do you think?