This Is Why Some People Cry Blood 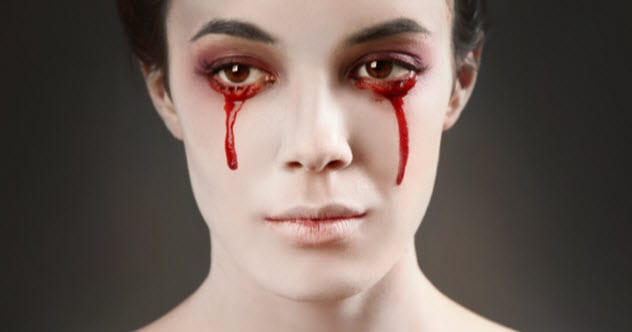 There have been cases of people who cry blood right from the 16th century. This may be a total freakout for most people seeing others crying blood or seeing themselves shedding bloody tears. Crying blood is actually something that occur in a very few number of people around the world - It is usually linked to a condition called haemoclaria.

Haemolacria is an extremely rare disorder that causes tears that are partially or entirely made of blood—something akin to stigmata, but doctors now have a bit of a better understanding of why some people shed bloody tears other than haemoclaria. Yet, in many cases it remains a mystery. Here are a few things that is known about shedding bloody tears.

Hormone changes can cause bloody tears

In what might be one of the earliest recorded cases of haemolacria, 16th century Italian physician Antonio Brassavola wrote of treating a nun who wept bloody tears when she was menstruating. Then, in 1581, a Flemish doctor wrote of a 16-year-old girl he treated “who discharged her flow throughout the eyes, as drops of bloody tears, instead of through the uterus.”

Modern science backs this idea up: According to a 1991 study of 125 healthy subjects, menstruation contributes to occult haemolacria, or traces of blood in tears. The paper found that 18 percent of fertile women have some blood in their tears, while only 7 percent of pregnant women, 8 percent of men, and no post-menopausal women show signs of bloody tears. The scientists concluded that "Occult haemolacria in fertile women thus seems to be induced by hormones, whereas haemolacria most often is provoked by local factors (bacterial conjunctivitis, environmental damage, injuries)."

Spontaneous cases are rare (but also happen in Tennessee)

Dr. Barrett G. Haik, director of the University of Tennessee's Hamilton Eye Institute, studied cases of unexplained and spontaneous episodes of bloody tears. His report, which was published in 2004 in the journal Ophthalmic Plastic & Reconstructive Surgery, determined that from 1992 to 2003, there were only four cases of spontaneous haemolacria without a medical cause—and two of the known cases that occurred since that study happened in Tennessee. "What's really rare is to have a child like this," Haik told CNN in 2009, when Inman's case first came to light. "Only once every several years do you see someone with no obvious cause."

People living in other places have experienced haemolacria, too. This year, 20-year-old Yaritza Oliva, who lives in Chile, began crying blood, and doctors have ruled out any likely causes, such as conjunctivitis or blood clots. And there are reports that Indian teen Twinkle Dwivedi allegedly cries bloody tears, but many attribute her ailment to Munchausen syndrome.

Almost as unexpectedly as it starts, haemolacria ends. “Most of these were relatively young patients,” Haik’s co-author, James Fleming, an ophthalmologist at the Hamilton Eye Institute, told the Tennessean in 2004. “As they matured, the bleeding decreased, subsided, and then stopped.”

Spann has experienced bloody tears for seven years, but the frequency has lessened. What was once a daily occurrence now happens about once a week. Haik and Fleming write in the paper: “In all patients, bloody tearing eventually resolved without further sequela. No recurrence has been reported over a follow-up period of 9 months to 11 years.”

In March, a Canadian man was walking on the beach when a poisonous snake bit him, causing him to weep bloody tears and experience painful swelling and kidney failure. Doctors attributed this to the massive amounts of internal bleeding caused by the snake's venom. In most cases of haemolacria, a head injury, tumor, blood clot, a tear in the tear duct, or a common infection, such as conjunctivitis, causes the bloody tears.

When patients cry tears, doctors look for tumors, conjunctivitis, or tears in the tear ducts. Fleming told WTSP that Spann's haemolacria "probably [has] a cause, but it is a small tear duct that is only a millimeter or two or three in diameter. It's a tube. To get into that tube and examine that tube from one end to the other would cause scarring, and you could lose part of the tear duct."