Wristwatch Prices That Can Build Mansions 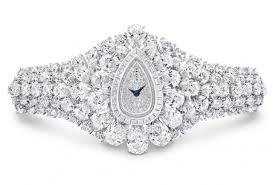 Luxury is something that most people always speak against yet they can't avoid it. Some persons see it as insane to lavish a huge amount of money in order acquire some certain commodities because they feel that such a huge amount of cash could be channeled into something more better rather than luxurious stuffs. But the truth be told - if possibly we have lots and lots of dollar and we are swimming in the pool of abundant wealth, the life of luxury we think is more or less not necessary might even become our vibe and we wouldn't mind lavishing lots of cash into it. Our Idea of luxury varies from person to person. Most people may see somethings as too luxurious to acquire while others may see it as an asset and a means of investment.

Below are some of the most expensive wristwatches in 2019 that their price will leave you in marvel.

This is it! The Graff Hallucination is the most expensive watch in the world 2019 with a price tag of $55 million.

From the start the watch was supposed to be the most valuable timepiece ever created! And they did it! The incredible worth stems from 110 carats of really rare and really big colored diamonds set into a bracelet of platinum.

The watch consists of 152.96 carats of white diamonds with a center fancy-cut exquisitely rare stone that is a 38.13-carat D Flawless pear shaped diamond that detaches into a ring.

According to Laurence Graff, the founder and chairman of Graff Diamonds: “The Fascination is an outstanding piece, carefully crafted so it can be worn in a number of different ways – adding a touch of magic to the jewel,”

Breguet Grande Complication Marie-Antoinette is the most expensive pocket watch in the world priced at $30 million! As we’ve been teasing you so far it is a case watch not a wrist watch.

So what makes this watch so costly?

It was commissioned by a an alleged lover of Marie Antoinette, the French queen. Work on the watch began in 1782 by Abraham-Louis Breguet and was finished in 1827 by his son, 4 years after his death.

The result, an amazing piece of design, class and technology containing every function that was possible at that time. Encased in gold, displaying the intricate mechanism running it, Breguet used sapphire to lower the friction within the piece.

Marie Antoinette did not get to see the watch, since it was completed 34 years after her execution, but we can be sure she would’ve been impressed. The watch was stolen in the late 1900’s and retrieved only in 2007.

Since every top watch connoisseur wanted it. As of 2019 the watch is valued at at least $30 Million. Currently the watch is secured at the L. A. Mayer museum so you can see it live if you’re in the area.

With 874 rare diamonds the Chopard 201-carat watch used to be the world’s most expensive watch and still is the 3rd highest priced jewelry watch out on the market! Sold in the year 2000 for this unbelievable amount of $25 million it made the front page of every luxury publication at the time.

It used to be the most expensive pocket watch the world had ever seen!

It was sold for $11 Million back in 1999 if we adjust for inflation and the economic environment + its novelty factor this piece could easily go for over $15 Million if it was to be resold. They wanted to put that theory to the test. Last year it went on Sale and it fetched a record breaking 24 million dollars.

Made in 1933 for banker Henry Graves by Patek Philippe himself, it took over 5 years to complete! It happens to be one of the most complicated and complex pocket watches in the world with over 24 functions!

Made out of 18 carat gold the watch used to be the world’s most expensive pocket watch until late 2013 when one piece dethroned it. It’s the one on the 3rd spot!