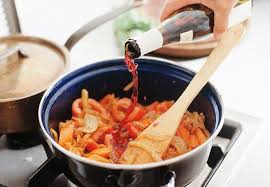 People who for religious or health reasons need to avoid alcohol often have concerns about hidden alcohol in foods. No foods naturally contain alcohol -- except alcohol -- but some foods have alcohol added, although the amounts are usually very small.

While it was once thought that all the alcohol added to dishes burned off in the cooking process, since alcohol evaporates at 172 F, research by the United States Department of Agriculture found that foods do retain alcohol after most cooking processes. Although the amounts are often minute, many prepared foods do contain some alcohol.

Meats prepared with alcohol added at the end of the cooking time retain 85 percent of the alcohol, the USDA reports. Typical examples of dishes made with added alcohol include veal Marsala, made with Marsala wine added in the last few minutes of cooking. Other examples of foods cooked with alcohol include marinated meats and stews. While cooking for a longer time does eliminate more alcohol, foods marinated in alcohol retain 70 percent of the alcohol content. It takes 2.5 hours of simmering to reduce the alcohol content down to 5 percent in stews, according to the USDA.

A no-bake dessert made with alcohol, such as grasshopper pie, which contains crème de menthe and crème de cacao, will naturally retain all of the alcohol content. Mousses and other cold desserts that have Grand Marnier or other liqueurs listed all contain alcohol.

Foods flamed with alcohol appear to have all the added alcohol burned off, but the food actually still retains 75 percent of the added alcohol, the USDA warns. Any flambéed meat or dessert will still contain alcohol.