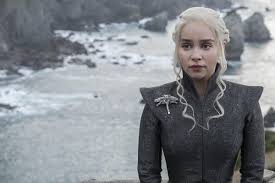 With only one episode left of Game of Thrones, all eyes are on the show's cast, especially Emilia Clarke. Clarke's character Daenerys Targaryen has one of the most dramatic storylines in the entire series. After last night's penultimate episode of the eighth and final season of GoT, Clarke's Daenerys is either shaping up to get everything she ever wanted or about to lose it all in a matter of 80 minutes.

Although the massive cast and crew are contractually obligated to keep the fate of their characters a secret until next week's finale, that didn't stop Clarke from posting a photo of herself in the GoT makeup trailer... bald? Yes, Daenerys Stormborn of the House Targaryen, First of Her Name, the Unburnt, Queen of the Andals and the First Men, Khaleesi of the Great Grass Sea, Breaker of Chains, and Mother of Dragons is without her signature braids.

Clarke posted the photo in response to last night's destructive episode, which features Dany settling into her role as the Mad Queen and burning down all of King's Landing without one sign of mercy. She captioned the photo, "This is what it took not only to shoot ep5...but to watch it too! #soshockingitblewmywigoff." Her facial expression and the bottle of Dom Perignon proves this episode was emotionally draining for the fans and the cast.

It's no secret that Clarke — along with several other cast members, including Sophie Turner who plays Sansa Stark — wears a wig on the show. But it's still shocking to see her without her signature braids and in a wig cap — especially when hair plays such a major role on the show. Plenty of Reddit threads and fan theories suggest that Dany doesn't make it to the Iron Throne. We only wish this behind-the-scenes shot told us more — including who is doing those braids in the first place now that Missandei isn't there to style them for her.