Things you should never say to a man you love 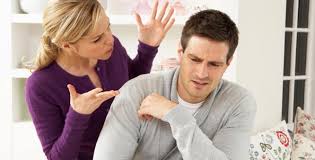 Although we tend to say a lot of things when we are upset which is very normal. But there are some certain things you shouldn't say to the man you love no matter how upset you are because there are just some statements that can't just be compensated for.

So you want to be careful how you come at your partner with certain talks. For men, we already advised against the things your woman would not be glad to hear from you.

And in this article, we list the things a woman should avoid saying to her partner at all costs - even when she is extremely rageful!

Making an unfair comparison between your partner and anyone else is always a recipe for disaster. Avoid it like a plague.

Your man is different, unique and has strengths, weaknesses and faults and glorious abilities, all of which you must have considered before deciding to be with him. Turning around and using his comparative weaknesses in certain areas against him is not well come.

Except he absolutely deserves it and you’re 100% sure you no longer want to continue the relationship, do not say this.

If you don’t mean it and you’re just angry, this isn’t one of those things you throw out there and try to apologize away later.

Saying sorry can be an incredibly good thing in relationships as it helps mend fences and restore peace but that’s only when done right.

Every time you try to apologize and a 'but' follows 'I'm sorry', you have negated the apology.

This could be a joke sometimes. But for the most part, it does not make sense to give your partner the idea that you think they are not good enough for you, or that you would rather be with someone else. No one wants to feel like they’re being loved out of pity. Also, your man doesn’t want to get the vibe of being a step down for you.

Your mates are doing so so and so

Nothing discourages and provokes a man when he is been reminded that he is not competent as his mates. Most women are fond of saying such--if you are saying such a thing to your partner you better stop it this very moment.

You are a lazy man

No man wants to be assumed as lazy. You must stop saying this to your partner except he is really displaying the act of laziness.