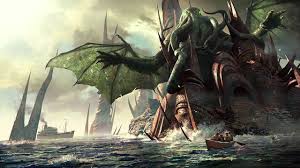 “It seemed to be a sort of monster, or symbol representing a monster, of a form which only a diseased fancy could conceive.” H.P. Lovecraft, “The Call of Cthulhu”

Nearly one hundred years ago, the legendary pulp horror writer H.P. Lovecraft penned these words to describe his seminal creation, the great Cthulhu. Cthulhu was an enormous living creature whom Lovecraft described as having “a vaguely anthropoid outline, but with an octopus-like head whose face was a mass of feelers, a scaly, rubbery-looking body, prodigious claws on hind and fore feet, and long, narrow wings behind.”

The creature existed in a kind of dreamless sleep beneath the surface of the ocean, but one day, Lovecraft’s story tells us, it would rise from its slumber heralding an age of madness and destruction that would mark the end of humanity’s supremacy in the world.

That Day Has Finally Come — Cthulhu Has Risen

Researchers have discovered a new species of living cucumber from a 430-million-year old fossil. The defining characteristic of this creature is its “45 tentacle-like tube feet,” the YaleNews article reports, “which it used to crawl along the ocean floor and capture food.” Scientists have dubbed the creature Sollasina cthulhu after Lovecraft’s famous creation.

Cthulhu and many of Lovecraft’s other creations were towering creatures of colossal size and cosmic scope. They dwarfed humans standing as tall as skyscrapers. Luckily for the sanity of those involved, Sollasina doesn’t quite reach those dimensions.

The researchers report that Sollasina was small, about the size of a large spider. However, that is still a giant sea spider with 45 legs, and “a mouth surrounded by 5 large ‘teeth.”

To add fire to the nightmare fuel, the fossil they discovered was so well preserved, researchers were able to create an exceptionally accurate 3D model of its anatomy.

“We created the reconstruction through a process called serial grinding,” said, Imran Rahman, lead author of the Oxford study on the discovery, told Newsweek in an article on the subject, “This involved painstakingly grinding away the fossil, a few hundredths of a millimeter as a time, taking photographs of each exposed surface with a digital camera. This allowed us to build up a dataset of hundreds of ‘slices’ through the fossil, which were then digitally reconstructed as a ‘virtual fossil’ on a computer.”

The paper on the find, available online at The Royal Society Publishing website, reports that the discovery of such a well-preserved fossil is important because it helps scientist understand the evolutionary gap between echinoids (sea urchins) and holothurians (sea cucumbers.) While Sollasina more readily resembles a sea urchin in appearance, it is actually an early sea cucumber Scientists can use the fossil to better understand how the contemporary sea cucumbers came to develop their current more slug-like forms.