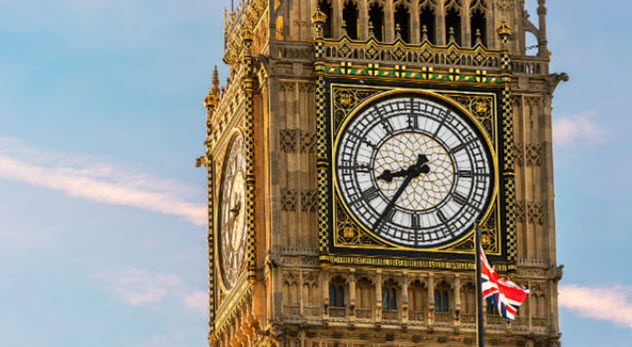 Many of the world’s most famous landmarks are iconic symbols of a time gone by. They provide visitors from across the world with an insight into an era and a city’s heritage. Yet, despite their notability, there are some unique facts that you might not know about these world-famous landmarks, which draw tourists from all corners of the globe.

The Tower Of London’s Ravens

The Tower of London, one of the most famous landmarks in London, was built by William the Conqueror in 1078 to create a new royal residence. However, it served as a prison from 1100 to 1952, housing some of the country’s most notorious criminals, such as Ranulf Flambard and the Kray twins.

The historic castle is now open to the public. Visitors can learn more about its history by exploring various prison cells, and they can also catch a glimpse of the Crown Jewels. However, many people might not know that the castle is protected by six ravens at all times.

Superstition would have you believe that if the ravens were to leave the tower, the kingdom would fall. For this reason, the tower currently cares for seven ravens—the six they need and an extra one in case the worst happens. Charles II is the man reportedly behind the superstition. He ordered the protection of the ravens following a warning that both the Tower of London and the Crown would fall if the birds were to ever leave.

The Crack In The Liberty Bell

The Liberty Bell, originally known as the State House Bell, once rang in the tower of the Pennsylvania State House, which is now called Independence Hall. The first bell was ordered in 1751 from the Whitechapel Foundry in London. However, the bell reportedly cracked on the first test ring. As a result, John Stow and John Pass, local metalworkers, melted down the original bell to cast the iconic version we know today.

Following 90 years of regular use, the Liberty Bell reportedly developed a narrow split in the early 1840s. It wasn’t until 1846 that a repair was attempted. Metalworkers chose to embark on the technique of “stop drilling” to widen the crack to prevent further damage and restore the bell’s tone. Sadly, the attempted repair led to the development of a second crack. Unfortunately, this silenced the bell forever and no one alive today has heard its original sound.

The Statue Of Liberty’s Color

The Statue of Liberty, which was presented as a gift from France to America in 1886, is easily one of the most iconic landmarks on the planet. More than four million tourists reportedly visit the statue every year to view the sculpture in all its green glory.

However, some might be surprised to learn that the landmark’s exterior was not originally green at all. When first erected, it was a copper color. A combination of rain, oxygen, and sea spray resulted in the statue becoming vulnerable to oxidization. This led to the development of a dull chocolate brown hue before it turned into the blue-green coating you know today. The reason the coating hasn’t been removed from Lady Liberty is because it naturally prevents the statue from experiencing further deterioration and damage.

Some archaeologists believe that many of the iconic stony ruins in Athens look very different today than when they were first built. For example, it is widely thought that the Parthenon once featured various paint colors. Recent tests performed by Evi Papakonstantinou-Zioti, a Greek archaeologist and chemical engineer, found the use of brilliant shades of blue, red, and green.

Traces of the hues were discovered following a laser cleaning of the landmark. Weather erosion is believed to be the cause of the fading colors on the world-famous temple, which was built in 432 BC. The blowing of sand, the bleaching from the sun, and modern pollution led to the damage.

Tower Bridge is a suspension and bascule bridge in London that was built from 1886 to 1894. It provides a passage across the River Thames to the Tower of London. Therefore, it is one of the most iconic landmarks in London which offers breathtaking views of the English capital.

However, there is more to the bridge than meets the eye. If you look a little closer, you’ll find the Tower Bridge chimney. It is painted in the same blue hue as the surrounding lampposts along the bridge. While people are looking out over the city, they could easily miss the cast-iron flue that is connected to an old fireplace in the Tower of London’s guardroom. It once offered a coal fire to keep the guards warm.

The Real Color Of The Golden Gate Bridge

The Golden Gate Bridge is one of the most famous tourist destinations in the US. However, contrary to its name, the suspension bridge isn’t actually gold. The paint color has been officially confirmed as international orange.

The tint, which is commonly used in the aerospace industry, manages to perfectly complement every passing season, which can continually create a beautiful San Francisco skyline. In fact, the landmark’s website even provides a detailed formula for the color, so fans of the bridge can create the same tone for themselves. The Golden Gate Bridge didn’t earn its name due to its paint color, which many people might believe, as it was named after the Golden Gate Strait, which is the waterway it straddles.

Big Ben is one of London’s most famous landmarks, which anyone can see when touring Westminster. However, many people are unaware that interior tours of the Elizabeth Tower, which houses Big Ben, are available. But you’ll need to be a resident of the United Kingdom to go on one. While tours are free of charge, every visitor who steps inside the iconic building must be sponsored by a member of Parliament or the House of Lords.

Those privileged enough to step inside will experience a one-hour presentation by a member of the Big Ben team. Due to current renovations, the attraction is now closed. But the secret tours are expected to resume in 2021.

Many people might be surprised to learn that the Hollywood sign would not exist today without the late Hugh Hefner. Erected in 1923, the sign originally spelled “Hollywoodland” and became an iconic symbol of Tinseltown.

However, after many years of neglect, the sign was starting to show serious deterioration by 1978. During this time, the Playboy founder was a household name. Aware that the Chamber of Commerce required $250,000 to restore the beloved sign to its former glory, Hefner threw a lavish fundraiser and auctioned letters from the previous sign for $27,000 each. Buyers included rock star Alice Cooper and actor Gene Autry. Thanks to Hefner’s fundraising efforts, the Mount Lee plot was restored with new letters.

However, this wasn’t the only time that Hefner saved the Hollywood sign. In 2010, The Trust for Public Land, a conservationist group, aimed to protect the 138 acres of land surrounding the Hollywood sign. Developers were hoping to build luxury homes on Mount Lee. As the conservationist group was about $1 million short ahead of the fast-approaching deadline, Hefner came to their rescue, donating the final $900,000 needed to save the sign.