The Way World Will Change if China Becomes World Power 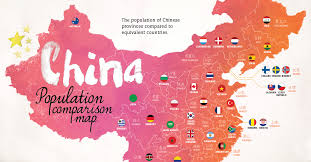 China is determined to become the world’s next superpower in no time. They already have plans in making this a reality, and Chinese president Xi Jinping has publicly declared that he wants China to be leading the world by 2050.

When China becomes the world power, we’re going to see our world completely change—possibly even within our lifetimes. America’s influence will wane, and for the first time in history, the world’s greatest power will be the People’s Republic of China.

China has made it clear how they want to reshape the world in their image and what a world would look like with the People’s Republic of China in charge.

China’s rise won’t just be good for China. The whole balance of power is going to change—and one of the biggest differences is going to be a whole lot more power in Africa.

Not many people realize just how big of a role China is already playing in Africa. China is currently the biggest source of African aid in the world. They’ve invested billions of dollars into the continent, and they’re only planning on spending more. By 2025, they’re projected to have sent Africa $1 trillion.

Western countries have too many moral qualms to invest that much money in a land where so many countries are led by dictators. American money tends to come with demands for political reform or the ends of atrocities—or, depending on who the president is, just gets cut altogether.

But China doesn’t care what Africa does. They’ve happily given money to the worst African tyrants, so long as it’s profitable for them, which it usually is. China says they get a sixfold return on every dollar they invest in Africa.

Africa has already set itself up as one of China’s closest trade partners, and, in exchange, China has lobbied to get more African states in the UN, which means that as China rises, Africa’s going to climb up with it. And since they’ll be allowed to do things their own way, we won’t just see a world under Chinese influence. We’ll start to see a world under African influence, as well.

The United States Will Slump Into A Depression

The United States is going to be hit hard when they lose their place as the world’s superpower. They won’t just quietly slip down into second place—they’re going plummet down into a massive economic depression.

Right now, America is in a great place because its currency is used for almost all international trade. The US dollar is treated like the new gold standard, and that’s keeping the American economy relatively stable.

But China is fully intent on putting an end to America’s cushy position. They have publicly declared their plan to have the Chinese yuan to replace the US dollar as the standard for international trade, and if they pull it off, America’s going to get hit hard.

The second that the dollar loses its spot as the currency of international trade, the United States will plummet into a depression. The US will, almost overnight, lose two percent of its economic output. Import prices will skyrocket, export prices will plummet, and countless people will lose their jobs.

After all that, the US just might be begging Africa for aid.

World Policing Will Come To An End

Despite some people’s paranoia, China probably won’t use its newfound power to take over the world and force everyone to be communist. If their deals with Africa are any indication, China’s going to work with a very gentle hand.

China has an official policy of noninterference with African governments. While the US has a history of sweeping into undeveloped countries and taking out dictators, China, as a rule, leaves them alone. They even invested money in countries like Sudan and Zimbabwe at the height of their human rights crimes, working off the principle that isn’t their job to police other governments.

That’s going to be a pretty major difference from the US. The US military is no longer meant to just protect America—it’s considered the main defense of all of Europe as well, not to mention almost every democratic nation in the world.

But China doesn’t care about democracy. And if their military starts to outpower America’s, we might just see an end to the era of soldiers swarming into underdeveloped countries.

University Teachers Will Have To Teach State-Approved Lessons

China might not bomb less developed countries into submission, but that doesn’t mean they won’t try to influence how the world thinks. They just prefer to do it through what they like to call “soft power.”

Part of that is done through schools. China is already trying to lure as many students as they can into their universities. They’ve already drawn in more African students than the US and UK combined, and they specifically target aspiring politicians.

In Chinese schools, teachers are specifically instructed to teach state-approved ideas, especially pushing Chinese and communist ideals. As China becomes the world’s superpower, there’s every reason to believe that they’ll keep that up—but that now they’ll have the influence to lure in the politicians of the future from every part of the world.

But it doesn’t stop there. China has already started influencing schools in other countries, too. They’ve set up their state-controlled Confucius Institutes in 1,500 different schools across 140 countries. These schools have Chinese teachers who are specifically instructed to support the “China model of development” and “correct” Western misconceptions in their classes.

This means that, when they have enough power, college isn’t just going to change in China. You’ll be learning Chinese state-approved lessons in every university around the world.

History Will Be Forcibly Rewritten

The Communist Party of China has very publicly declared its intention to rewrite history. In a speech, President Xi Jinping told his country that he was working to improve “international communication” so that they could “present a true, multi-dimensional, and panoramic view of China.”

That might sound like a lot of fluff, but other documents from the People’s Republic show exactly what that means. China is determined to rewrite what they consider “Western misconceptions” of history—or, in other words, to replace the world’s perception of history with theirs.

One of the bullet points on their agenda is to change our concept of Chairman Mao and to get the world to accept him as a wise, influential leader. They want to break down the perception that the rise of communism in China brought problems and make it seem gentler. And they want to get rid of the idea that the Tiananmen Square Massacre was an injustice.