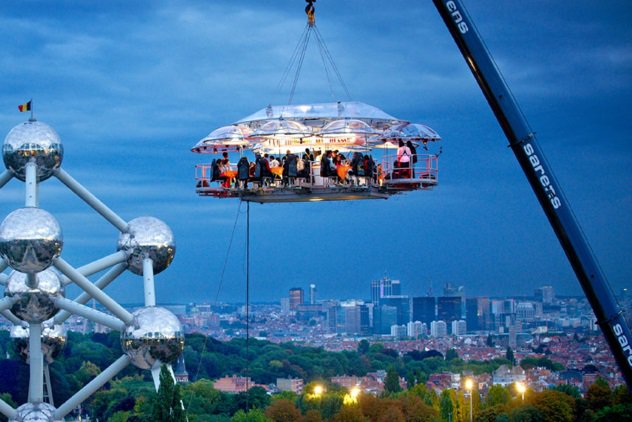 Dinner In A Tree

Ever thought of climbing a tree for dinner? Quite a few diners do just this for a particularly unique restaurant experience. In Costa Rica, you will find a restaurant and cafe built around the branches of a massive ficus tree (pictured above), which you can access by simply climbing the stairs. In Thailand, however, you can be hoisted up into the treetops in your own private dining pod. Food is served to you via a series of cables from the ground below. Meanwhile, in Queensland, Australia, you can enjoy dinner in the treetop canopies at a local spa resort.

Cemetery restaurants are not unremarkable. Many larger cemeteries have cafes where visitors and mourners can stop for refreshments. Restaurants often surround big graveyards to cater to visitors. However, one restaurant in India is perhaps a little too close to the dearly departed for most people’s liking.

The New Lucky Restaurant in Ahmadabad, India, is located on the site of an old Muslim graveyard. Rather than disturbing the dead, the tables are set up surrounding the graves. Metal fences surround the raised coffins, beside which diners enjoy their graveside coffee and curry.

You probably think of stalactites and stalagmites when visiting a cave, or even perhaps diving to discover underwater treasures. Caves have always been popular venues for picnics and parties, and established cave restaurants are a growing trend.

The Grotta Palazzese cave restaurant in Italy is believed to date back to the 1700s, as evidenced by its depiction in a watercolor from 1783. Today, it offers a fine dining experience with a view of the Adriatic Sea.

Along China’s Yangtze River, diners step along an acrophobia-inducing 30-meter-long (100 ft) walkway secured high up a cliff to access a mountain cave where they can enjoy an unusual dining experience. Many Asian holiday destinations are also following the trend for subterranean dining, with luxury cave restaurants popping up near many popular resorts.

Fancy dinner on a flying dining table? Yes, that is actually a thing, if you are not afraid of heights. In 2006, a Belgian communications agency teamed up with an amusement park company, and they came up with a bizarre dining concept, Dinner In The Sky, which has taken off around the world. Up to 22 diners sit on a platform which is then hoisted 50 meters (164 ft) off the ground to enjoy a midair feast.

The concept of a flying feast has taken off, and diners in over 40 countries have enjoyed a sky-high meal. It sounds like an exhilarating dining experience, but just don’t drop your napkin.

A toilet block is also probably one of the last places you would expect to find a restaurant or cafe. Yet they are another class of disused buildings which are becoming increasingly popular venues for culinary establishments. Buildings that were once seedy, filthy, and covered in graffiti have been given makeovers to become trendy eateries.

A popular burger outlet in Berlin retains the unmistakable tiling from the building’s former days as a public convenience. Maintaining the building’s character, napkins are even dispensed from a toilet roll holder.

In the UK, converting disused water closets into trendy cafes and bars is becoming quite common. A number of smaller towns are turning these old facilities into restaurants in lieu of demolishing the buildings.

In Sydney, the city council has been investigating turning old toilet blocks into cafes. Many of these former restrooms are located in publicly convenient locations, so they make ideal, if not interesting, venues for an eatery.