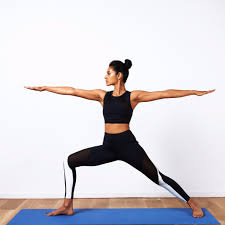 The practice of yoga supports physical, mental, and spiritual development that allows you to create the best version of yourself. Yoga may also be an effective tool to help you lose weight, especially the more active forms of yoga. And you may find that the awareness gained through a gentle, relaxing yoga practice helps you to lose weight as well. Many experts agree that yoga works in different ways to bring about a healthy weight. Let’s take a look at a few of those ways.

The mental and spiritual aspects of yoga focus on developing mindfulness. This increases your awareness on many levels.
It can make you more conscious of how different foods affect your mind, body, and spirit.

A 2016 study suggested that people who develop mindfulness through a yoga practice may be better able to resist unhealthy foods and comfort eating. They may also become more in tune with their body so that they notice when they’re full.

Yoga is thought to be especially beneficial for people who are struggling to lose weight in other ways as well. A meta study from 2017 reported that mindfulness training has positive short-term benefits regarding impulsive or binge eating and physical activity participation. There was no significant effect on weight loss directly, but it’s thought that weight loss is associated with longer periods of mindfulness training. Further studies are needed to expand on these findings.

Since you’re advised not to practice yoga on a full stomach, you may find that you make healthy eating choices before doing yoga. After a yoga session, you may be more likely to crave fresh, unprocessed foods. You may also learn to chew each bite more thoroughly and eat more slowly, which can lead to less consumption.

Practicing yoga can help improve the quality of your sleep. You may find that you’re able to fall asleep more easily and sleep more deeply when you have a consistent yoga practice. Ideally, you should sleep between six and nine hours each night.

Quality sleep is often associated with weight loss. A 2018 study found that people who had restricted sleep five times per week lost less fat than the group that followed their normal sleeping patterns. Both groups were limiting the number of calories they consumed, suggesting that sleep loss has an adverse effect on body composition, including fat loss.

Yoga nidra is a form of guided relaxation that you do lying down. The practice may help you to sleep more deeply and increase mindfulness. You can also set intentions during yoga nidra, which may help you to develop weight loss goals.

A small 2018 study found that healthcare workers who did yoga nidra for eight weeks increased their levels of mindfulness. This mindfulness included acting with awareness and not judging inner experiences.

Their levels of sleepiness weren’t significantly different at the follow-up. However, this score improved the longer people did the practice. Larger, more in-depth studies are needed to expand on these findings.

While yoga isn’t traditionally considered an aerobic exercise, there are certain types of yoga that are more physical than others. Active, intense styles of yoga help you burn the most calories. This may help prevent weight gain. Ashtanga, vinyasa, and power yoga are examples of more physical types of yoga.

Vinyasa and power yoga are usually offered at hot yoga studios. These types of yoga keep you moving almost constantly, which helps you to burn calories.
Practicing yoga may also help you develop muscle tone and improve your metabolism.

While restorative yoga isn’t an especially physical type of yoga, it still helps in weight loss. One study found that restorative yoga was effective in helping overweight women to lose weight, including abdominal fat.

These findings are especially promising for people whose body weight may make more vigorous forms of yoga difficult. A review of studies from 2013 found that yoga is a promising way to help with behavioral change, weight loss, and maintenance by burning calories, heightening mindfulness, and reducing stress. These factors may help you to reduce food intake and become aware of the effects of overeating. More in-depth, high-quality studies are needed to expand on these findings.

How often should you do yoga to lose weight?

Practice yoga as often as possible in order to lose weight. You can do a more active, intense practice at least three to five times per week for at least one hour. On the other days, balance out your practice with a more relaxing, gentle class. Hatha, yin, and restorative yoga classes are great options.

If you’re a beginner, start slowly and gradually build up your practice. This allows you to build up your strength and flexibility and prevent injuries. If you don’t have time for a full class on certain days, do a self-practice for at least 20 minutes. Allow yourself one full day of rest each week.

Combine your yoga practice with activities such as walking, cycling, or swimming for added cardiovascular benefits. As part of your routine, avoid weighing yourself directly after a yoga class, especially if it’s a hot yoga class, since you may lose water weight during the class. Instead, weigh yourself at the same time each day.