Bizarre Facts About Newborn Babies That Most People Don’t Know 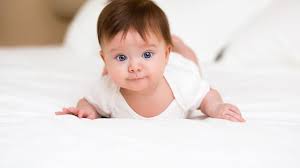 Young babies are born with a well-developed sense of taste, but not for salt. Studies have shown that babies can’t taste salt until they’re about four months old. They can taste other flavors as well as adults can, especially sweet, bitter, and sour flavors and maybe even better: some studies indicate that babies actually have more taste buds than adults do.

They cry … but don’t shed tears

Newborns cry an awful lot, but they can’t shed tears: they don’t have functional tear ducts until they’re between three and twelve weeks old. (They can, however, produce “basal tears,” the nonemotional tears we produce constantly to keep our eyes moist.)

They have no kneecaps

New born babies have little or no kneecap. If you X-ray their knee, what you will see may just be small smudgy spots. Reason: all bones start off as cartilage, and they harden, or ossify, over time. Kneecaps take an especially long time to form (from three to five years) and because cartilage doesn’t show up on X-rays, babies appear to have no kneecaps.

That lack of hard kneecaps is a good thing, because the spongy tissue serves to absorb some of the abuse toddlers take during their crawling months and from their frequent falls. These body parts are younger than you think, too.

They have more bones than adults do

While still in the womb, babies are exposed to high levels of the female hormone estrogen. At birth, when the baby becomes “disconnected” from mom, as it were, those estrogen levels fall rapidly and in girls can cause what is known as pseudomenstruation, similar to menstruation in young and adult women.

(Sharp drops in estrogen and related hormones are in fact what triggers menstruation in adult women.) Mothers unaware of this phenomenon often freak out when they see a little blood in their babies’ diapers, but it’s very common and happens in about a quarter of all female babies, usually in the first seven days of life.

The drop in hormone levels that causes psueudomenstruation can also cause galactorrhea, a phenomenon in which newborns develop tiny breast buds, and actually lactate, producing tiny amounts of milk from their nipples. It can happen in boys as well as girls. Like pseudomenstruation, it’s not dangerous or uncommon, occurring in about 5 percent of all newborns, and can persist for up to two months. (In old European folklore, milk from the breasts of newborn babies was referred to as “witch’s milk” and was thought to have magical powers.)

They’ve drunk their own pee

Babies start urinating in the womb just a few months after conception. Where does it go? They drink it! More precisely, the urine mixes with the amniotic fluid surrounding the baby in the uterus. And by the third trimester of pregnancy, a fetus swallows about a liter of amniotic fluid every day. Since a fetus does not need hydration or nutrition in the womb (that comes from mom via the umbilical cord) experts say this serves mostly as practice for swallowing and digestion. This means that every last one of us spent several months of our lives drinking our own pee.

They can remember what they tasted in utero

As said earlier, newborn babies cannot taste salt, but they can taste other flavors, and they can taste those flavors while they’re still in the womb, starting from about four or five months into pregnancy. Amniotic fluid is believed to be affected by the food the expectant mother eats, which, in turn, is believed to affect a baby’s flavor preferences after birth. If a pregnant mom eats a lot of garlicky foods, for example, the baby will taste that in her amniotic fluid in the womb, and will have a good chance of being drawn to garlic-flavored foods after birth.

Sometimes babies are born with just a few tufts of hair on the top of their heads, or a fine “peach fuzz” all over their tiny domes. This isn’t what we’re talking about. As it develops in the womb, a baby’s entire body becomes covered in a thin layer of hair called lanugo.

Child development experts say that the hair helps regulate a body temperature in utero. So, if your baby is born looking like a werewolf-in-training, don’t worry: it’s perfectly normal. The hair will gently fall out on its own over the first few weeks of the newborn’s life. If your baby wasn’t born covered in lanugo, well, it already fell off toward the end of gestation, and the baby ate it.