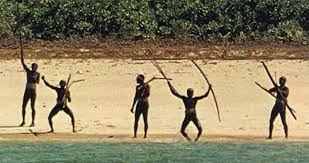 This is the mysterious Sentinel tribe of Andaman Islands. Why mysterious you ask? While the world progressed, the Sentinelese have remained untouched by modern civilization. They are one of the last existing tribes that has shunned contact with the outside world.So how do they live? Where do they go?What language do they speak? Most of what we know about them is through observations.

It is said that they have made little or no advancement in over 60,000 years and that they are direct descendants of the first men from Africa. They cannot produce fire. They sustain themselves on fish and coconuts. The only metal they have used is metal washed up on their beaches which they've used to make weapons.

Efforts made to establish contacts have not always been successful. Because the tribe is so hostile, they will try killing you on sight.The language they speak is incomprehensible even to other indigenous tribes of Andaman. This suggest that the Sentinelese have maintained a hostile isolation for centuries. many contact expeditions were initiated over the last century. Fish and coconuts were offered as "gifts"as a way to start contact.But the tribe would either retreat into the jungle or respond with violence.

In 2006, the tribe killed two fishermen who tried fishing on their shores and the helicopter that came to retrieve the bodies were met with a deadly attack of bows and arrows. Thy have also been known to throw spears at low-flying aircraft... this happened the 2004 Tsunami, when rescue aircraft flew over the island to look for survivors. The tribe miraculously survived that Tsunami. It was suggested they reached higher ground before the wave hit.

Nothing is known about their language or social structure except that they tak part in bizarre mating rituals.In 1989, some Indian anthropologist witnessed this first hand. The tribe noticed the anthropologist and guested to them. After a while, a woman of the tribe walked out and started to shout at the men in an unknown language. Unfazed by this, one of the women started mating with one of her tribesmen right there. One by one, each woman started to do the same with a warrior of choice and this turned into a community mating ritual.

The only man to establish "friendly" contact with the tribe was an Indian anthropologist Trioknath Pandit. Pandit spent year trying to communicate with them, when one day some tribesmen walked up to him, touched and undressed him. However, after countless other effort to communicate, the Indian government gave up.
The mere existence of a healthy and thriving tribe, untouched by modern world surely puts thins into perspective. Survival International, deems the Sentinelese the most vulnerable and isolated tribe on the planet. Which means they are likely to have no immunity to common diseases. So, introducing them to civilization can threaten their existence. Sadly, many similar indigenous tribes in the Andaman have gone extinct because of modern man's meddling. maybe the only way to prevent such annihilation is to just let them be. To them the outside world has brought nothing but violence, so why would they trust us?

Even though it will be fascinating to interact with them, it would be cruel to impose our way of life and values on them.
Leave a comment...