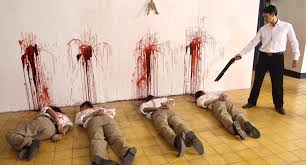 Carlos De Luna
In 1983  Wande Lopez was viciously stabbed to death at a gas station. Police arrested Carlos Deluna for the murder despite being lack of physical evidence linking him to the crime. They arrested him because he matched several eye witness descriptions. DeLuna maintained his innocence and accused Carlos Hernandez of the murder. Deluna assumed the murderer must have been Hernandez as two looked similar they were often mistaken for twins. However prosecutors told the jury Hernandez didn't exist and DeLuna was executed by lethal injection. In 1999, two years after DeLuna's execution, Carlos Hernandez confessed to the killing.
HUUGJILT
On April 9th 1996 in China, 18 years Huggjit heard the cries of a woman being raped and attacked in a public toilet. After trying to save her Huugjilt phoned the police, only to be arrested for the crime himself. Just two month later, Huugjilt was found guilty and killed by firing squad. Nine years later a serial rapist confessed to the crime, proving Huugjits's innocence.His parents were offered just $4,300 in compensation.
Cameron Willingham
In a fire at Cameron Willingham's family home tragically killed his three young daughters. Willingham was arrested on suspicion of using arson to kill his children. Prosecutors claimed that Willingham had a fascination with violence, an accusation based only on his iron Maiden and Led Zeppelin posters. He was found guilty of murder and executed by lethal injection in 2004. Five years latter , the Texas Forensic commission found sufficient evidence to prove that the fire was just an accident.
Colin Campbell Ross
In 1922, Colin Campbell Ross was working at his wine shop in Melbourne when 12 years old Alma Tirtchke was raped and strangled to death in a nearby alley.Colin was arrested, despite several alibis stating he never left his shop. After hairs of a similar color to Alma's were found in his house, he was sentenced to be hanged. 76 years after his execution, DNA testing fount that the hairs were not Alma's and Colin's name was cleared. The real killer is believed to have been a relative of Alma's with a history of pedophilia tendencies.
Campden Wonder
In 1660, Wilam Harrison, a manager on the Campden Estate, suddenly disappeared. Nobody was found but his servant John Perry found his blood stained hat and collar band. John became the key suspect but maintained his innocence. He latter confessed that his brother and mother had murdered Harrison to avoid paying rent. They denied any involvement in the crime and John later retracted his confession, however, the web of lies they created sent them all to the gallows to be hanged. Two years latter, Harrison reappeared in the village, claiming he had been kidnapped and sold as a slave in turkey.
Larry Griffin
19 years old Quintin Moss was shot 13 times in a drive-by shot 13 times in a drive-by shooting in Missouri in 1980. career criminal and witness to the crime  Robert Fitzgerals claimed that three black men were in the car including Larry Griffin who allegedly fired the lethal shot with his right hand.The fingerprint of Griffin who was left handed weren't found in the car or on the murder weapon and yet the court found him guilty of murder. In 1995, Griffin was executed by lethal injection, and to this day, the St Louis court refuses to withdraw his conviction.
Timothy Evans
In 1950, Beryl Evans and her baby daughter were murdered and their bodies were hidden in the wash house of their back garden. Beryl's husband Timothy was arrested and accused of murder, despite a complete lack of evidence. Timothy was sentenced to death by hanging after just three-days trial. Three years after his execution, Evan's neighbor John Christie was exposed as a serial killer. Christie confessed to not only to murder of Beryl Evans and her baby,but also to the murder of six other women in the house, they include his own wife whom he his under the floorboards.
Joe Arridy
Joe Arridy was a very young man with severe learning difficulties. In 1939, he was arrested after being found loitering near the murder of a schoolgirl in Colorado. Although a man called Frank Aguilar confessed to the murder, the police coerced Arridy into confession too. He was sentenced to death by electric chair. With an IQ of just 46, Arridy had little understanding of his impending fate on death row and spent his final days happily playing with a toy train. It wasn't until 72 years after his execution that he was proven innocent.
Aisha Ibrahim Duhulow
13 years Aisha Ibrahim Duhulow was walking to her grandmother's house in 2008 when she was raped by three armed men. Her aunt took her to the police station to report the crime to Al Shabaab, the terrorist organization that controlled their city in Somalia. No investigation was made into finding the rapists, and instead Aisha was arrested for committing adultery. As a crowd of 1000 people gathered, a hole was dug in the ground, and Aisha was buried to her neck and stoned to death.

The Griffin Brothers
In 1913 John Lewis a 73 years old man from South Carolina was found shot dead in his home.The murder weapon was traced to Monk Stevenson, the police offered him a life sentence in exchange for testifying against Thomas and Meeks Griffin.They were the the two wealthiest black men in the county who owed over 130 acres of land. An all-white jury and racist judge who disapproved of black people owning land, sentenced them to death by electric chair, despite having no hard evidence against them. It was not until 100 years latter historians confirmed the Griffins were innocent.
Leave a comment...