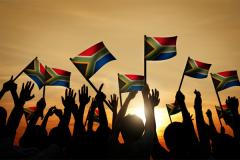 In South Africa, You are Legally Allowed to Attach Flamethrowers to Your Car to Deter Car-Jacking

Yes, you read that right. There's little or no statistics on the success rate of this car protection strategy, but it is a legal thing to do in South Africa.

It is believed that every year, South Africa moves about two inches farther away from South America as part of the subtle continuation of a continental drift.

The bridge is located in the heart of the Garden Route, is situated 216 metres above the Bloukrans river and forms part of the N2 highway connecting Cape Town with Durban. There is a space under the bridge for people to stand when performing the bungee jump.

The First Ever Heart Transplant Was Carried Out in South Africa

It was carried out at the Groote Schuur hospital in Cape Town. The surgeon who performed the operation was Christian Barnard and it was done in 1967. The operation was considered successful though the patient died 18 days later from double pneumonia, but the patient's body had not rejected the heart.
Leave a comment...