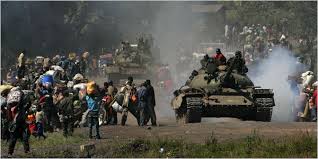 The Congo Civil which began 5 June 1998 and ended December 1999 was caused as a results conflicts between two or more contending ethnic groups.The war was a sequel of the civil war of 1993 and involved militias representing three political candidates, the conflict ended following the intervention of the Angolan army, in which the former President/Ruler Denis Sassou Nguesso was reinstated to Power. On the 5 June 1997 after A Sassou led-coup, Lissuoba is the first democratically elected President of the Republic of the Congo and served from August 31, 1992 to October 15, 1997, ordered that the Cocoye militia detain Sassou and under duress disarm the Cobra militia, which resulted in a Second Congo civil war. Fighting soon engulfed the whole city, with the Cobra, Cocoye and Ninja militias each having controlling areas they claim their own within the capital, the government then hired Ukrainian mercenaries to fly attack helicopters, later mobilizing them in a bombing campaign of Cobra-controlled areas, since those areas were densely populated, there was a  high number casualties, combatants engaged in a lot of extortion and harassment of the civilian population, selecting their targets on the basis of ethnic group. On the 16 June, 1997 they was unsucessfully held talks between Lissouba and Sassou-Nguesso in Libreville, Gabon, which was organized with the arbitration of the United Nations, the European Union(EU), France and a some African countries. French soldiers and US Marine Corps troops present in the capital conducted a joint operation, evacuating 6,000 foreign citizens through the Brazzaville Airport as warring parties agreed to a three-day ceasefire in the area on the 17 June, 1997. During this same time Lissouba recieved support from Laurent Kabila, who was  the president of the Democratic Republic of the Congo by handing Lissouba hundreds of Soldier because Lissouba accuses Cobra of emplloying supporters of Sese Seko.
Air strikes on Cocoye
Between 11-12 October 1997, Angolan air force fighter jets conducted a number of air strikes on Cocoye positions within Brazzaville. On 16 October 1997 Cobra militia supported by tanks and a force of 1,000 Angolan troops cemented their control of Brazzaville, having ousted Lissouba two days earlier. Denis Sassou Nguesso assumed power on the following day, declaring himself president. He effectively incorporated the Cobra militia into the national army, without fully disbanding them. After capturing the capital, Cobra militiamen spread out over the city, detaining and executing dozens of enemy combatants and political opponents and looting their property. A parallel Angolan offensive on Pointe-Noire met with little resistance, as the majority of government troops surrendered. Driven outof Brazzevile, Cocoye and Ninja fighters regrouped and started clashes in Northern cities of Impfondo, Ouesso and Owando as well Pointe-Noire. In April 1988 Cocye insurgents seized the Moukoukoulou Hydroelctric dam situated in the Bouenza department killing various employees in the process and ceasing power supply to Pointe-Noire.
On 14 November 1998 Ninja militants launched an all attack on Mindouli, killing 41 civilians, including six members of a local arbitration committee.
On 18 December 1998 Cocoye rebels seized the town of Nkayi, conducting arbitrary execution of government officials and ethnic Mbochis; government forces regained control of the town three days later. Elements of the Chadian and Angolan armies were deployed to the areas of Bouenza, Niari and Lekoumou as well as the Pool department, aiming to counter increased rebel activity.
On 16 December 1998 a band of 300 Ninja militants infiltrated the Bacongo and Makelekele neighborhoods of Brazzaville, starting clashes that lasted four days. The areas were targeted by heavy mortar and artillery shelling which caused widespread destruction, internally displacing 200,000 civilians. Widespread looting and summary executions were carried out by government forces following the conclusion of the engagement, which left at least 1000 people dead.
In December 1999, amidst continuous government offensives, a total of 2,000 Ninja and Cocoye rebels surrendered to the authorities after signing a peace agreement with the government, officially ending the conflict.
Leave a comment...