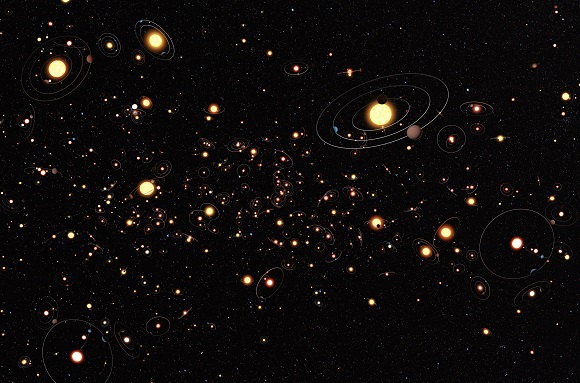 As the holiday period is here once again, a lot of reading, chatting and playing and family time are part of the itinerary for most. So this year instead of telling the regular odd activity not entertain your friends and family with these pretty amazing space facts instead?
1. There are thousands of other planets out there.
We have eight planets in our Solar System. However, outside of our Solar System there are thousands of other planets. The extra-solar planets or exo-planets are in orbit around another star. So far we have almost 1800 confirmed new worlds, with another 3000 awaiting confirmation. Astronomers are looking to a star's goldilocks zone for planets that may be habitable, just like the Earth. The majority of planets discovered so far are hot gas giant planets.

2. In space the skin on your feet peels off!
This is a pretty gross fact but in the micro-gravity environment, astronauts are not using their feet to walk. Therefore the skin on their feet starts to soften and flakes off. As laundry facilities do not exist in space, astronauts will wear the same underwear and socks for a few days. Those socks then need to be taken off very gently. If not those dead skin cells will float around in the weightless environment.

3. On Venus a day is longer than a year.
This is tricky one to get your head around but a year on Venus (that is the length of time it takes to complete one whole orbit around the Sun) is 224.7 Earth days. However it takes 243 Earth days to rotate on its axis just once.

4. The astronauts were placed in quarantine after returning from the moon.
There is a famous image of President Nixon talking to the Apollo 11 crew consisting of Michael Collins, Neil Armstrong and Buzz Aldrin. This continued until after the Apollo 14 crew returned safely. After this it was decided that the Moon did not contain any deadly diseases. The Apollo 13 crew, who had a malfunction and had to return to Earth, did not have to be quarantined after their re-entry as they didn't actually walk on the moon.

5. One million Earths can fit inside the Sun.
Ancient astronomers once believed the Earth was at the centre of the Universe but now we know that the Sun is at the centre of our Solar System and our planets orbit the Sun. The Sun makes up 99.8% of the entire mass of the whole Solar System. One million Earths would be needed to be the same size as the Sun.

6. You become taller in Space.
Another change to the human body in micro-gravity is that spine straightens out, as gravity is not pushing you down. In fact you can be up to as much as 5cm taller in the Space Station.

7. Extreme weather warning!
Some times on the Earth, especially here in Northern Ireland the weather can be a bit rubbish! However our weather is awesome compared to some of the other planets. Jupiter has fast winds and the Great Red spot, a massive hurricane style storm, has raged there  for the last 300 years. Mercury and Mars have extreme temperature changes in the same day. Venus is a scorching five times hotter than boiling water. Saturn and Uranus also have extremely fast winds. However Neptune has the fastest ever wind speeds reaching a staggering 1600mph!

8. Space is not that far away.
Space officially begins at the universal marker of the Karman Line. This invisible boundary is 100km above the Earth. In theory if you could drive your car upwards, you could be in space in less than hour.

9. The hottest planet is not the closest planet to the Sun.
Even though Mercury is the closest planet to the Sun, it is not actually the hottest. Mercury does not have any atmosphere meaning that this planet is only hot in the daytime when it is directly facing the Sun. At this stage temperatures can rise to 425¯C but at night the planet's temperature can drop down to a freezing -180¯C. Venus is the hottest planet. Its thick clouds trap the Sun's heat causing Venus to be a sizzling 500¯C all of the time!

10. The moon looks bigger on the horizon
There is an optical illusion which makes the moon appear to be larger the lower it is in the sky. The apparent magnification is not caused by our atmosphere. It is more of a mind trick. When the moon is closer to the horizon, it is closer to objects like buildings and trees which therefore in comparison makes the moon look bigger. However there are times when the moon really is bigger. During its elliptical orbit the moon has times when it is actually slightly closer to the Earth (Perigee) or further from the Earth (apogee). This happens about once a month, due the moon's orbit around the Earth. Usually is not noticeable to the eye. However when a full moon occurs at the same time of the moon's perigee it can be called a Super moon and appears 12-14% bigger than normal!

11. There's a moose loose
Eccentric Astronomer Tycho Brahe (1546-1601) believed that the Moon and Sun orbited the Earth but the other planets orbited the Sun. He catalogued many stars and objects, and has a crater on the moon, and supernova remnant named after him. However his wild antics are perhaps just as interesting. He wore a fake silver nose after losing his real one in a sword fight and he also had a pet moose which died falling down the stairs after one to many drinks. When his body was exhumed and examined in 2010, it is thought that a burst bladder was the cause of his death not mercury poisoning by a jealous colleague which was considered a cause of death. Astronauts are literally star sailors

12. The word astronaut comes from the Greek word Astron which means star and nautes which means sailor. The Russian cosmonaut has a similar meaning from kosmos' meaning universe and again nautes sailor.

13. You can cry in space but your tears don't fall
On-board the International Space Station, water floats like bubbles or spheres. However the water will cling to a surface until it is dislodged. This means that tears start to form bubbles around your eyes as the weightless environment is not causing your tears to fall. This sounds really cool but it can be dangerous. ESA astronaut Luca Parmitano suffered a space suit leak whilst on a spacewalk. The water leaked into his helmet covered his eyes and ears, but thankfully he made it back into the Space Station unharmed, but if not he could have drowned in space.

14. Dirty underwear and toilet paper has helped grown plants on the ISS
American astronaut Don Pettit discovered that by folding a pair of underpants into a sphere shape and stitching in some Russian toilet paper (which is thick, wool like gauze), this created a warmer environment for some tomato and basil seeds to start to sprout. Like their socks, underwear is only changed every 3-4 days so he figured the pants might provide some extra nutrients for the plants!

15. There is a dwarf planet named after an Easter island legend
Dwarf planet Makemake was discovered at Easter 2005. The Easter Island Moai figures were the inspiration for its name. Makemake in Rapa Nui mythology was the creator of humanity and the god of fertility. He is also a feature in many rock and cave drawings on the island.

16. Nebulae come in all shapes and sizes
Nebula means cloud in Latin. These are areas in which stars are being created or where a star has died. The cosmic clouds come in all shapes and sizes and are made out of interstellar dust and gases. There is a Christmas tree nebula, a horsehead, a unicorn, a hand, fried egg and lots more. These beautiful clouds which are not visible to the naked eye really highlight the fact there is a lot more happening in the night sky than you can see.
Unicorn in space. Otherwise known as the Trifid nebula, this stallar cloud is a pillar of gas and dust.

17. The North Star will changeeventually
The North Star used for navigation, a steady point in the night sky will change, however not in our lifetime. The Earth is rotating like a spinning top and therefore the pole of our planet wobbles. Currently it points to Polaris but in the year 13727 our Pole Star will be the star Vega, in the constellation of Lyra. Vega was the also North Star in 12000BCE.

19. In space metal sticks together
In a vacuum like space, when two pieces of metal touch each other they bond together. This is a process called cold welding. On the Earth because of the oxygen in our environment this does not happen naturally but it is used during some manufacturing processes. It is something to take into account but it is not usually a problem as the astronaut's tools maintain an oxide layer even when leaving Earth.

20. The furthest man-made object is Voyager 1. It has messages for aliens on-board.
In 1977, Voyager 1 and 2 were launched. Their primary mission was to visit Jupiter and Saturn. Voyager 2 continued onto Uranus and Neptune; Voyager 1 has now made its way into interstellar space. Voyager 1 is further away from Earth than the distance between the Sun and Pluto. Both craft carry a golden record on board, which will act like a time-capsule of Earth. It has greetings from Earth as well as different kinds of music. It also has noises of rocket engines, the sea, people talking, animal's sounds and lots of images. All of which sum up the Earth. United States President Jimmy Carter said at the time This record represents our hope and our determination, and our good will in a vast and awesome universe. These messages have been recorded as electronic impulses which can be translated into written words. If any aliens find it then can enjoy some Louis Armstrong as well some Peruvian panpipes!

I hope you have enjoyed these weird and wonderful facts about Space.

ãAre All Tahitian Pearls Black?ã and Other Pearl FAQ Answers