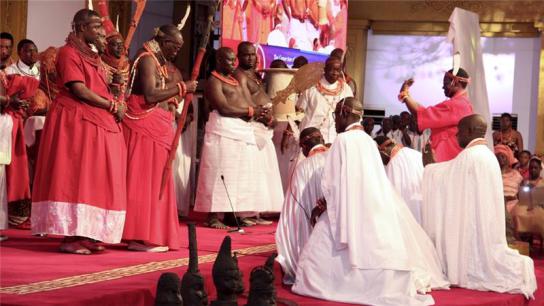 Benin City was founded in the 10th century and over the years, it has evolved into a city with strong and grounded traditional institution. This institution has flourished since the 14th century. If you by any chance find yourself in the city that prides itself in its culture and tradition, Jumia Travel, the leading online booking agency shares ways you can enjoy your stay in the capital city of Edo state.
Tour the Oba of Benin Palace
The Oba of Benin Palace is an edifice and bastion of culture. You can conveniently say it is a place to learn about the rich history of the ancient Benin Kingdom. The Palace was rebuilt by Oba Ewedo II after it was destroyed by the Britain during the 1897 war. There are relics of past Oba of Benin. Although there is a limit to where you can go or what to see at the Palace, it is still a wonderful place to visit. It is located in the heart of Benin and was listed as a Unesco, World Heritage Site in 1999.
See a movie at Kada Cinema
Going to see a movie is another way to get out of the rut in Benin City. One of the well-known cinema in the City is Kada Cinema. You can watch the latest movie with your friend over a pack of popcorns and your favourite beverage.
Visit the Ogba Zoo
If you love animals, then you should not leave Benin without visiting Ogba Zoo, nature and pack. It covers 750 Acres of Urban Park with a Biological Garden as well as a tourist resort. Some of the attractions at the park include  Lions, Chimpanzees, Giant Tortoises, Rock Python, Peafowls among others. It is located along Ring road.
Eat Mama Ebo pepper rice
If you are worried about where to eat, then look no further than Mama Ebo Pepper Rice. It is one of the places that will be recommended for you to eat by your tour guide. Beyond the tasty meals, you will experience rice preparation in a different way. The restaurant sits comfortably at 4, Irowa Street in Benin City.
Party at Club Joker
There is nothing like winding up your trip to Benin by leaving your Prestige Hotel and Suites to party. The best place you can go to indulge is Club Joker. They have their Karaoke night on Wednesdays from 7pm-11pm, Game Night on Thursdays 7.00 pm-10:45 pm and Sunday Live Band from 7.00 pm-10:45 pm. It is never a dull moment.
Leave a comment...