Obudu Resort: The Place Where The Sky Kisses The Earth 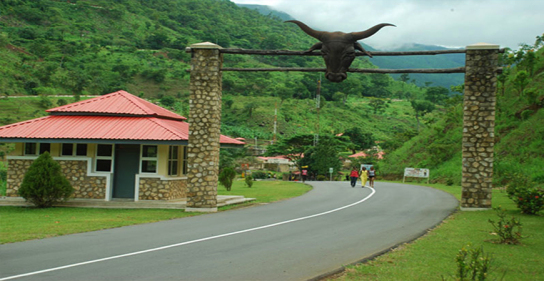 Who is surprised that one of the best resort in Nigeria is located in Calabar? You should not be. This is because Calabar in South-South Nigeria is a well-known tourist hub frequented by fun seekers from within and outside the country. To further put this in perspective, the capital City of Cross River host the Calabar Carnival, which is known as Africa's biggest street party. But this is by the way.
Obudu Resort is one of the most pleasant and complimenting places to getaway and has an unforgettable time in Nigeria. In fact, you don't need to travel out to Dubai, Paris, London, Millan and New York for your vacation. Obudu Resort is your best bet for an amazing break or holiday to detox.
Jumia Travel, the online booking agency spoke with Noel Ubong, a manager at the Obudu Resort who told us more about the resort.
History
Ubong said: "Obudu Ranch Mountain Resort, Obudu Resort for short is a plateau of sort situated in Obanliku Local Government area of Cross River State. The Resort is comprised of 22 rolling hills with near flat tops and has a land mass of 340 square kilometers. With a temperate weather, the Resort enjoys one of the most pleasant climatic conditions in Africa, with an average temperature of 11c.
"Obudu Resort was discovered in 1949 by a Scottish Ranger/Adventurer, Mr. Mac Caughley who in the course of tracing the Southern Highlands from Enugu stumbled on this mesmerizing mountain range. He left back and return with a Veterinary Doctor, Mark Hughes, and Rtd Major Cranfield. They settled here a while and Cranfield realized the economic and tourism potential of the Resort and started an integrated farm. Cranfield got a lease on the Resort from the then Colonial authority and developed it into a full Ranch, thus the name Obudu Cattle Ranch. The Obudu Resort is owned by the Cross River State Government." He concluded.
Attractions:
Ubong again: "Besides the over 150 rooms, the Resort boasts of an ultra modern international conference center, a spa, a gym, a games house, and Kiddies play zone.
Other exciting attractions according to Ubong includes,
The Cable Car which is the longest passenger Cable Car in the world. The cable cars run on a cable which has the carrying capacity of 6 people. You will get a panoramic and picturesque view of the resort from the Cable Car. It is wonderful and remarkable.
The Waterpark comprised of the sports pool, the fun pool, and the kiddies pool. The Fun Pool has heightened Slides (long snaky slide and short slide). The Waterpark is sandwiched by scenic mountains and overlaid by a beautiful Love Garden. A cascading rocky stream adds so much fascination to the Park. Also, there's the Grotto. This is a twin Waterfalls that empties into a natural swimming pool.
The Holy Mountain is another thrill Obudu offers. This ancestral worship place and historic bunker have the most volatile temperature in the Resort. Generally, it adds to why Obudu Resort is described as the place where the sky kisses the earth.
The Becheve Nature Reserve and Canopy Walkway is an Urban Park of some sort. It is home to rich and rare fauna and flora. This Reserve is a must see. The Canopy Walkway is a 60 Km walkway that provides a volatile mixture of fear and excitement.
The Resort also has a Dairy Farm, Honey Factory and Vegetable Farm where carrots, grapes, cabbage, lettuce etc are grown.
Restaurant
Ubong rounded up the chat stating that the ranch has about 4 restaurants that offer both local and continental foods and drinks. He concluded that you can book the resort on Jumia Travel.
Leave a comment...