MOUTH-WATERING AFRICAN DELICACIES YOU SHOULD TRY 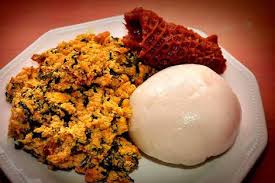 Africa is a continent rich in culture, tradition, diversity and food recipes. Here are delicacies you should either invest your culinary skills in or try whenever you are chanced. You will definitely not regret it.
KENYAN/SWAHILI CHICKEN BIRYANI (KENYA)
It's a traditional Kenyan coastal cuisine and a rice-based dish (that is, it is eaten with rice) known for its unique aroma and flavor. It is similar to the Indian Biryani because the recipe was introduced to the East Africans by the Indians. It is basically cooked with chicken, mutton, beef, fish, eggs or vegetable.
JOLLOF RICE
Also called Benachin (one pot) by the Wolof people, the origin of jollof rice has for some time been a culturally sensitive issue between the Nigerians and Ghanaians since both countries claim to be the origin of jollof rice. This memorably delicious dish consists mainly of rice, tomatoes and tomato paste, vegetable oil, onions, salt, spices and chilli pepper (meats, fishes and vegetables like green peas, runner beans etc. may or may not be added)
KAPENTA AND SADZA (ZIMBABWE)
It's a popular Zimbabwean staple food. Kapenta is crisp-fried dish consisting of two species of small freshwater fish native to Lake Tanganyika. It can be dried or fresh and is stewed with onions, groundnut powder and tomatoes, served with fresh greens. Sadza is the mountain of delicious maize porridge that goes alongside the Kapenta.
MUAMBA DE GALINHA (ANGOLAN CHICKEN STEW)
This mouth-watering Angolan dish is a spicy, somewhat oily stew that gets its distinct flavor from red palm oil.  It is rich in the aromatic flavor of garlic, onions, spiced up with hot pepper and thickened with okra, with, of course, a sizeable marinated chicken. The dish is usually served with boiled yucca (cassava) or over rice.
PAP EN VLEIS/SHISA NYAMA (SOUTH AFRICA)
Shisa Nyama is a term used to describe a barbecue or braai where people (families and friends) come together to grill meat in an open fire. Shisha Nyama is actually a Zulu phrase that literally means to "burn meat". While Pap en Vleis (maize porridge and meat) is an umbrella name that embodies the combination of starch and braai or stewed meat, with a side-serving of spicy gravy, relish or chakalaka.
Steak, chops, kebabs, chicken and boerewors (a spicy farmer's sausage) are accompanied by maize porridges in various forms including phuthu and stywe pap, krummelpap (crumbly porridge), and suurpap (soured pap).
Leave a comment...