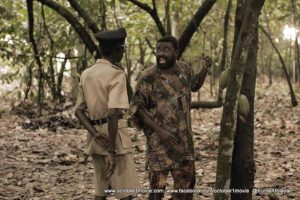 Nollywood is the sobriquet for Nigeria's film industry. The industry is currently witnessing a boom as it churns out new and exciting movies. So, there is little or no argument when it is described as the third largest movie industry in the world.

Now, a good number of Nigerians are watching Nollywood movies alongside Hollywood movies. At the same, they are visiting cinemas to watch these sterling movies made by prolific producers like Kunle Afolayan, Lancelot Imasuen, Emem Isong and Tunde Kelani, among others in locations like Lagos, Calabar, and Enugu.

Despite all these accolades, there is still a long way for these movies to go to compete favourably with Hollywood and Bollywood. This is because there are still some petty and trivial things that you see in these movies. This can easily put viewers off. In line with this,here are some of these annoying things.

In some cases, the title of the movie will give you a fair idea of the plot. And if you decide to watch the movie, with 100% certainty you can tell what is happening next. Often times than not, Nigerians who watch Nollywood movies do not look forward to the climax and its resolution. Thus, due to this predictability, they easily lose interest.

You must have questioned why they are wasting so much time at a particular scene. The answer is that the producer wants the film to have a sequel. Definitely, you know that the movie doesn't need one.  But the thinking of the producer is different as the movie can have like 3 sequels with different titles.

No storyline or plot

Some Nollywood movies have no plot or storyline. It seems like they hurriedly gathered actors and actresses to just act a script that has no story. This leaves some Nigerian film enthusiasts to question why they wasted time watching the movie.

Some accident or shooting scenes are a write-off

Accident or shooting scenes in most Nollywood movies are a write-off. For those who are addicted to Hollywood and watch the same scene in a Nollywood film, you will be awed at the way the act is poorly done. This is a major scene that producers need to improve.

Many Nigerians now watch indigenous language movies especially Yoruba movies. But one flaw about these movies is that it is poorly subtitled. So, the movie is restricted to those who can only fathom the language.

Witchcraft has become one way to identify Nollywood movies and this not good for the image of the country. As a result, Many Nollywood enthusiasts frown at this very negative portrayal.