Funny yet annoying things to avoid when taking selfies 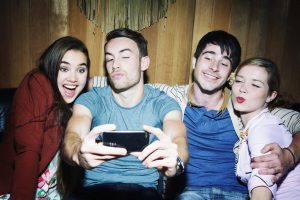 Very few people can say they have never taken a selfie even if they do not post it on Facebook, Instagram or twitter. However, for a large number of people who are addicted to selfies, there are certain things you should avoid when taking one.

When you see some selfie poses, you cannot help but laugh. Even though selfie is all about poses, and pulling a bizarre face is another thing. Some people stick out their tongue, pull a duck face or a sparrow face which may be fun but nobody is interested. It is better to be your natural self.

Because they are celebrities, what they do can easily be overlooked including taking near naked selfies. Kim Kardashian is a good example. But, since you are not a Kardashian, there is no need to take such selfies. Just remain modest whenever you want to take a selfie. In fact, you will be receive bashing for  putting up such pictures.

The most common form of selfie is that taken with a smartphone in one hand. This acceptable. There is also the timed selfie, which can result in some interesting results. And then there is the reflection selfie which you avoid. If you want to do  reflection picture, do it properly.

A selfie is so-called because it's meant to be a shot of you. Ideally, nobody else should appear in the shot. Your friends can also feature in the pictures. But there are some people who go as far as groom a pet to take pictures. These pets are just a distraction. There is no need to preen your pet.

Don't take selfies in a toilet

Each individual has their own idea of a suitable setting for their selfie. It could be on the sofa, stressing on public transport, or having fun on a rollercoaster. These are all fine, but there are a few places that should be avoided when taking selfies especially the toilet or the bathroom.