#BBNaija grand finale: All you need to know-The good,Bad and Ugly 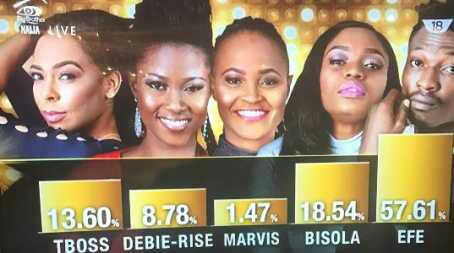 The 2017 BBnaija reality show has come to an end and we will taking a look at the activities and eviction of the last 5 housemates standing to the end of the reality show.

Marvis the mass communication graduate from onne tribe was the first housemate to be evicted out of the top 5 to be evicted from the house during the finale show. She is the fourth runner up in the 2017 BBnaija show.

Marvis was alleged to be in a romantic relationship with fellow housemate Efe, but during the questioning session at the eviction show ,when asked about the continuation of that relationship outside the house, she said she is not sure she will still hold on to that relationship. According to herĒĚ Based on logistics, I have a lot to pursueĒĚ. Marvis had the least votes of 1.47%

Debbie Ėrise is the second housemate out of the last 5 contenders to be evicted from the house. She was a very good friend of the boss lady, Tboss. Debby is talented, humble and down to earth. She had only 8.78% votes. She is the third runner up.

The boss lady, our own Tboss from Edo state with 7 tattoos and some piercings finished third in 2017 BBnaija reality show. She was the third to be evicted from the house out of the 5 powerful contenders. she is the second runner up. During the finale show Tboss was asked to clarify her ďI will spend 25m naira in one week mantraĒĚ. She answered by saying her life has never been about money, she love good life, but there are things she wouldn't compromise because of money. She said, she actually meant that after sorting out her bills that the money might not be enough for her. Notwithstanding, she went home with #500,000 forbeing the Arena games overall winner as presented by payporte CEO.

Bisola a mother of one is the first runner in the 2017 BBnaija reality show. She won the One campaignĎs back to school challenge .she will be travelling to New York and will also be addressing the UN congress. her relationship with TTT another housemate during the show might have ended abruptly because during the ongoing big brother Naija finale show, she discovered that TTT was actually married after seeing a wedding band on his hand, though she reacted in a matured way.

The delta man Efe, a graduate of Economics and a rapper is the last man standing; he was blessed among women because he was the only man left with 4 pretty girls in the house. He is the winner of the 2017 BBnaija reality show. Efe won the cash prize of #25 million naira and a brand new sorento  Suv car. He had total votes of 57.61% to become the winner and they weren't a closer contender because Bisola the first runner up had only 18.54% votes.