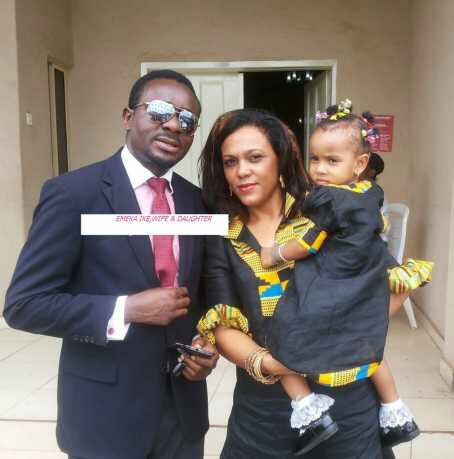 Top Nollywood Star, who is noted for his romantic roles in Nollywood movies have parted ways with his wife Mrs. Suzanne Emma .this did not come as a shock because of their incessant fight and quarrels that has well played out severally on social media.

The marriage was dissolved by the island customary court, south west, Nigeria and it was presided over by Chief Awo Awosola and other three panelists. The divorce came on the heels of attacks on the wife by Emeka Ike. Emma declared in a previous petition filed before the court of incessant beatings, molestation and torture and in which she can't continue to suffer in silence. In view of these attacks and the evidence before the court, it was resolve that the marriage was beyond repairs and going their separate ways will be the best bet. The marriage was therefore dissolved by the court.

The marriage had produced 4 kids and the court granted the custody of all the kids to the Top Star Emeka Ike, while unhindered access to the children was granted to the wife.

Speaking on the divorce saga, the top star Emeka Ike said that ōthe devil played a fast one on their marriage, when the wife started paying his children's fees and had prayed the court not to dissolve his marriage even with all the problems and the wife moving out of their marital home for more than five timesöØ with the decision of the court the two parties have 30 days to do any appeal to the court.