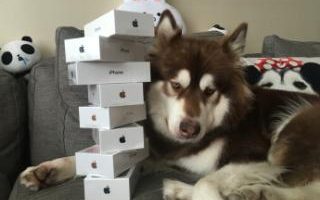 Sicong, the only son of China's richest man Wang Jianlin, worth $30 billion according to Forbes, has made the news again for pampering his dog - Coco the Alaskan Malamute. He bought the dog 'eight iPhone 7 handsets'.

These Pictures emerged on China's social media and it shows Coco posing next to a stack of eight boxes believed to contain a phone in each.
In China, an iPhone 7 costs 6,988 yuan (£803) while an iPhone 7 Plus costs 7,988 yuan (£918). Sicong who is also a successful businessman and China's most eligible bachelor, refers to his pet as "The dog princess of the people.'
More photos below...