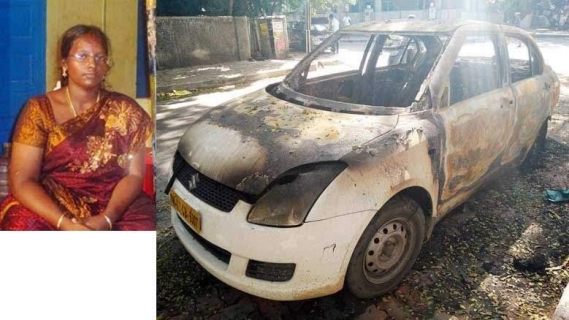 A 30-year-old cab driver burned his wife alive inside his car in Nandanam, India on Sunday August 7th. The woman had doused herself with petrol to threaten her husband following a bitter argument and he lit a match stick and set her on fire.


he couple was traveling in a Maruti Swift accompanied by their two kids. They had an argument following which the woman, identified as Prema Nagarajan, 28, poured a bottle of petrol on herself that was kept inside the car for emergency. To her utter shock, her husband, Nagarajan, lit a match stick and set her on fire inside the car. He then left the car, abandoning Prema and her children, reports India Today.

According to The Times of India, Prema gave a dying declaration about her husband's shocking behavior. He was later arrested under charges of murder by Saidapet Police.

"Nagaraj stepped out of the car after setting her on fire. She managed to throw her children - Thisanth Raj, 4, and two-year-old Yashwanth Raj - through the open window on to the road. The children are out of danger and are admitted in KMC hospital for treatment," a police officer

While Prema managed to push out her kids from the car, she succumbed to her injuries. She was rushed to Kilpauk Medical College with high degree burns and died around 6pm on Sunday. Her four year old son Thisanth Raj is in a critical condition. The car was gutted in the fire.

The police said Prema married Nagaraj five years ago after her first husband deserted her. The couple lived at a house on Alaiamman Koil Street in Teynampet with their two children.