Shocking photos of an incredibly overcrowded prison in the Philippines 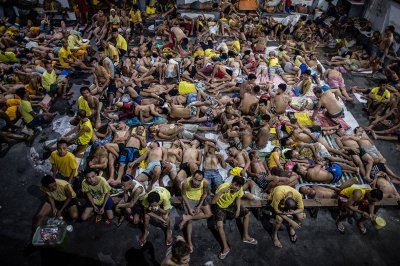 These photographs by photojournalist Noel Celis who works for AFP reveal the shocking conditions in an overcrowded prison near Manila in the Philippines. Quezon City Jail was built 60 years ago to house 800 prisoners. It now accommodates 3,800 men, who compete daily for space. Inmates take turns to sleep on the floor of an open-air basketball court, on the steps of staircases, underneath beds, and in hammocks made out of old blankets. Their bodies are packed together like sardines, unable to stretch out.

When it rains conditions become even worse because inmates cannot sleep in the open air. The government provides a daily budget of  about $1.10 for food and 8 pence for medicine per inmate, according to an AFP report. There is just one toilet for every 130 men, and buckets of water are used to flush them. The stench is compounded by rotting rubbish in a nearby canal.

The Philippine prison system is the third most congested in the world, according to the University of London's Institute for Criminal Policy Research.

Conditions in the prison are getting worse as police wage a brutal war on crime. Security forces have killed hundreds of people and detained thousands more in just one month as they have followed the orders of President Rodrigo Duterte, who has said the top priority at the start of his six-year term is to eliminate drugs in society.