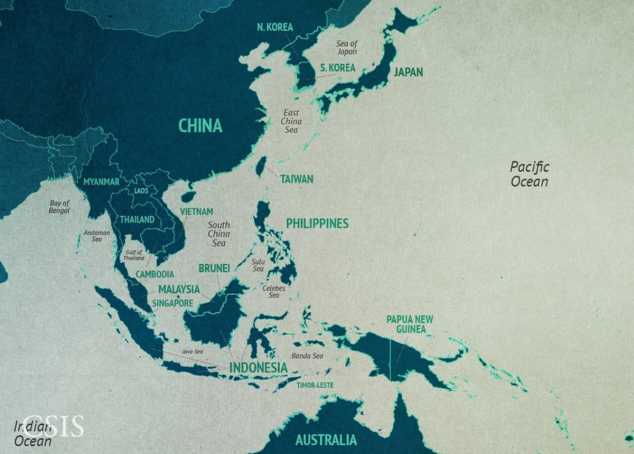 An international tribunal on Tuesday ruled against China's territorial claims in the South China Sea, after the Philippines challenged Beijing's right to exploit resources across vast swathes of the strategic waters.
In a 497-page ruling that risks stoking further tensions in South-East Asia, a Hague-based arbitration court said there was no legal basis for China to claim historic rights over the waters of the South China Sea and that it had breached the Philippines' sovereign rights with its actions.
China immediately said it would defy the decision, which it described as "null and void"Ø with "no binding force"Ø.
"China neither accepts nor recognises it,"Ø the foreign ministry said.
Beijing had refused to take part in the tribunal proceedings, with officials saying the tribunal had"no jurisdiction".
China claims almost all of the energy-rich waters in the South China Sea, through which about $5 trillion  (┬Ż3.8 trillion) in ship-borne trade passes every year.
Neighbours Brunei, Malaysia, the Philippines, Taiwan and Vietnam also have claims.
The panel said there was no legal basis for China to claim historic rights to resources within its so-called nine-dash line, a boundary that is the basis for its claim to roughly 85 per cent of the South China Sea.
It said China had interfered with traditional Philippine fishing rights at Scarborough Shoal, one of the hundreds of reefs and shoals dotting the sea, and had breached the Philippines' sovereign rights by exploring for oil and gas near the Reed Bank, another feature in the region.
None of China's reefs and holdings in the Spratly Islands entitled it to a 200-mile exclusive economic zone, it added.
Beijing responded by saying the Chinese government would not accept "third party dispute settlement"Ø with regards to territorial issues.
"China's territorial sovereignty and maritime rights and interests in the South China Sea shall under no circumstances be affected by those awards,"Ø the foreign ministry said in a statement.
The ruling also said China had caused permanent harm to the coral reef ecosystem in the Spratlys, charges China has always rejected.
The United States, which has carried out"freedom of navigation"exercises in the region, urged all parties to avoid provocative statements or actions.
"The United States expresses its hope and expectation that both parties will comply with their obligations,"US State Department spokesman John Kirby said in a statement.
The Philippine government, which brought the case in 2013, welcomed the ruling, with Perfecto Yasay, the foreign secretary, calling it a"milestone decision".
The court has no power of enforcement, but a victory for the Philippines could spur Taiwan, Vietnam, Malaysia and Brunei to file similar cases.
"This issue is the one that China does not want to be put under the spotlight,"said Prof Zhou Fangyin, from the Guangdong Institute for International Strategies, based in the southern city of Guangzhou.
"The ruling will set up a criteria for other countries when they are dealing with territorial disputes with China."
Ahead of the ruling, around 100 members of a Philippine nationalist group demonstrated outside the Chinese consulate in Manila, calling on Beijing to accept the decision and leave the Scarborough Shoal.
In China, social media users reacted with outrage.
"It was ours in the past, is now and will remain so in the future,"wrote one user on microblogging site Weibo.
"Those who encroach on our China's territory will die no matter how far away they are."
[Telegraph.co.uk]
Leave a comment...