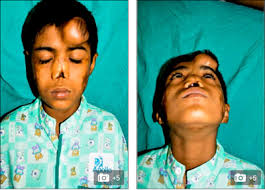 Doctors in India have replaced a 12-year-old boy's damaged nose with a new one which was grown on his forehead.
Arun Patel's nose was badly damaged and disfigured when he suffered from pneumonia as a baby.


The infection damaged the cartilage of his nose, making it difficult for doctors to fix it.

A similar operation was carried out in China in 2013 where a man who had damaged his nose in a traffic accident was given a new one.

Arun's parents took him to a doctor in their village in the central state of Madhya Pradesh when he suffered from pneumonia soon after his birth.

the treatment made his condition worse and he lost his nose due to extensive tissue damage.
More than a decade later, a team of doctors in Indore city decided to conduct a rare four-phased plastic surgery to give Arun a new nose.

Dr Ashwini Dash, who led the surgical team, told BBC Hindi's S Niazi that he was ōconfident that the new nose would work properly like his other organsöØ.

He added that the entire operation took about a year to finish.

In the first phase, a silicon ōtissue expanderöØ was put on his forehead to make space to grow a new nose. Then a special chemical was injected to make the tissues expand.

The second phase involved taking cartilage from his chest to create a new nose, which grew on his forehead over three months.
The doctors removed the artificial nose in the third phase and implanted it on his face. The final phase involved repairing his forehead.