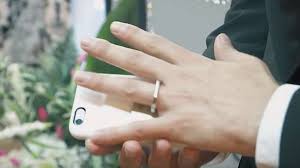 Americans spend almost five hours a day on our phones. For many, we literally wake up and go to sleep with our trusty phones snuggled by our side. One man has taken his love for his phone to a new--and very weird--level by marrying it in Las Vegas.

According to Cosmo, Aaron Chervenak is making headlines for walking down the aisle with his phone.

"If we're gonna be honest with ourselves, we connect with our phones on so many emotional levels," he says in a video explaining his marriage. "We look to it for solace, to calm us down, to put us to sleep, to ease our minds, and to me, that's also what a relationship is about...My smartphone has been my longest relationship. That's why I decided to see what it was like to actually marry a phone."

The romantic union took place on May 20 but the marriage isn't recognized by the state of Nevada because "it's not yet legal."