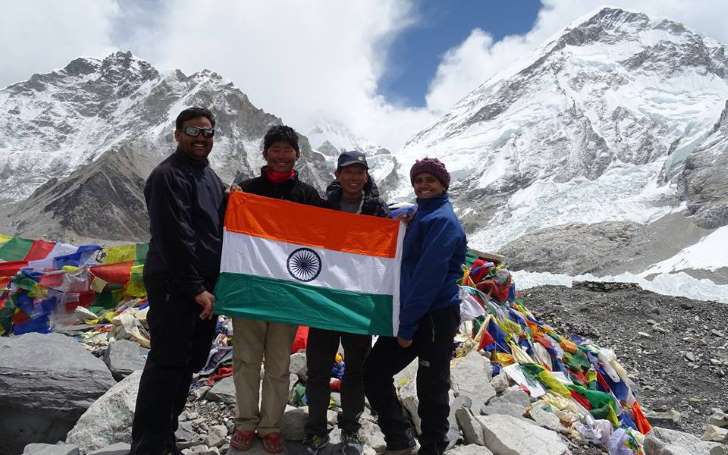 An Indian couple who claimed to have climbed Everest last month have been accused of lying and even doctoring photographs of themselves to appear at the summit in a bitter row between feuding mountaineers.

Dinesh and Tarakeshwari Rathod, both 30, had been widely lauded for their achievement on May 23, when images showed them proudly unfurl the banner of the Pune police force, where they both work as constables, atop the world's highest peak.

At an emotional press conference shortly after their trip, the couple paid tribute to three less fortunate Indian climbers who had perished on the same slopes that week, and told reporters that they had for years put off having a child until achieving their dream of successfully defeating Everest.

But according to a group of rival alpinists also from India's Maharashtra state, holes quickly appeared in the Rathods' story.


They claim that the pair superimposed images of themselves taken lower down EverestSatyarup Siddhanta, another mountaineer, last night pointed out on Facebook that an image ostensibly showing Mrs Rathod holding an Indian flag atop the summit published on the website of their Nepalese tour company Makalu Adventures appeared to be a crudely photoshopped version of one of his own images.

The couple appear to be wearing different coloured climbing gear in different photographs of their alleged ascent, the group added, asking in a written dossier sent out to journalists: "Is it possible to change your costume or shoes and still not have frostbite? What does it indicate?"Ø

Although they do not dispute the couple were at Base Camp, the group has also alleged - citing other climbers who were present - that the pair did not arrive there until early May, too late to acclimatise for a summit attempt.

"I don't know what to think."ØThe Pune police department where the two work has now launched an internal investigation into the allegations.

However Makalu Adventures insisted that there was no doubt of the couple's achievement, and put the claims down to rivalries between the groups.

Mr Shelke, who hails from the same city of Pune where Mr Rathod works and refers to the couple as former "students"Ø of his, has previously accused them of fabricating achievements.

He alleges they did the same on an expedition he organised to climb Australia's 10 tallest peaks in 2014.

Mohan Lamsal, president of Makalu, said: "After these complaints, I have asked our Sherpas more than 100 times. They always said we climbed to the top together, there is no doubt sir."Ø

"We have to trust our Sherpas. There has been no hanky-panky here."Ø


"There is type of argument comes particularly between Indian people, they want to dominate each other. It is not good,"Ø he saidThe climb has been verified by the Nepalese government, who carried out a detailed inspection of the couple's accounts and images taken on the expedition, he said.

Mr Lamsal also insisted it is commonplace for climbers to switch into heavier climbing gear when they reach Camp 2 or 3, and the start of much harsher conditions.

He added that media reports erroneously referring to the Rathods as India's first couple to summit Everest may have provoked anger among rival groups, as another -  Pandeep and Chetana Sahoo - had managed the climb just days earlier. He insisted that the false claim did not come from the Rathods.

Rishi Bhandari, another Nepal-based climber who organised the Sahoos' expedition, agreed that his clients had summited first, but said that such intense and competitive rivalries over climbing achievements were not unknown among Indian mountaineers.

"There is type of argument comes particularly between Indian people, they want to dominate each other. It is not good,"Ø he said. "In Nepal we respect the people who climb mountains. We respect each other. But in India, if a rival does something good, they will feel upstaged.