Footballer given red-card for farting/gassing during match 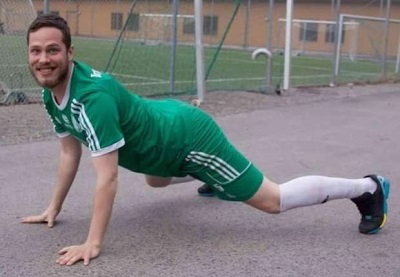 In a division 9 match in Sweden, football club Pershagen SK's Adam Lindin Ljungkvist was sent off for farting, an action the referee termed "unsportsmanlike behaviour" after he farted loudly in a game against Jarna SK's reserve team.

The game was almost over and Adam Lindin Ljungkvist was already on a yellow card, until he polluted the air and was booked for the second time with a yellow card- an automatic red card.


"I needed to fart, I had a bad stomach,"  Lindin Ljungkvist told Lanstidningen Sodertalje. "So I just farted. Then I received a yellow card and then a red. I was shocked, it's the strangest thing I have ever experienced on a football field.

"I asked the referee: 'What, you can't fart on the field?', he replied: 'No'. He may have thought that I farted in my hand and threw it towards him, but he didn't say."


The referee reported that he had already booked the player in the 65th minute, but Ljungkvist says he can't remember receiving one.
The referee, Dany Kako, has admitted that the card was indeed for passing gas.

"I perceive that it is a provocation against another player. He did it on purpose and it was inappropriate behaviour. Therefore, he received a yellow card." Referee Kako told Lanstidningen Sodertalje.

"Yes. No one must get a yellow card for farting on the field. Once there was a player who stood and peed next to the pitch. That was also a yellow card."
Leave a comment...