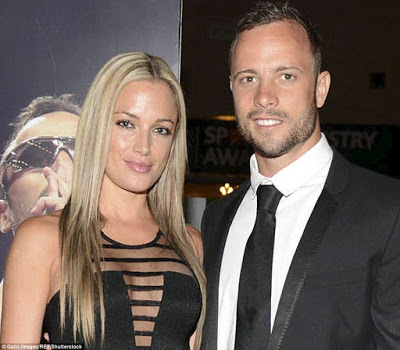 Crime scene photos showing the dead body of Reeva Steenkamp, who was murdered by Oscar Pistorius at his home in 2013, have been made public after her father, Barry Steenkamp, pleaded for them to be released to show what Pistorius did to his daughter. The photos were released by the Pretoria High Court yesterday.

The 29-year-old model was struck in the head, elbow and hip as she hid in the toilet door at Oscar's home on Valentine's Day in 2013. Oscar shot her with three military-grade Black Talon bullets that are designed to expand upon impact, wreaking devastating damage to the flesh it strikes. The photos are horrific. *viewer discretion advised*

Mr Steenkamp said he had seen "only one photo"Ø of his daughter's murdered body, which was produced in court when Mr Steenkamp was present two years ago, but wanted "the world to see"Ø the others, as a warning about the dangers of firearms.

Repeating the request at Pistorius' sentencing hearing on Wednesday, Chief Prosecutor Gerrie Nel said: "The court should have access to these photographs. The court itself should revisit certain things in sentencing."

"Four bullets tore through her body. The court should take that into account as an aggravating factor... It's part of sentencing. We think it's time that people should see what those bullets did; what the accused did."

Defence lawyer Mr Roux had suggested the application to release the images was inappropriate at this stage of the proceedings. He asked the court: "Must children look at it?.. What is going to be achieved?"

The defendant's brother, Carl Pistorius, who was in court, said over twitter that the application to release the photos was "distasteful".