'50 perverts killed in bar': The headline a Turkish newspaper website used to describe the Orlando massacre 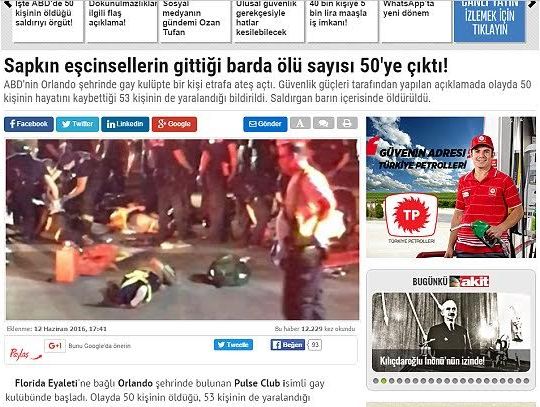 '50 perverts killed in bar'... This is the headline that a Turkish newspaper with strong links to Turkish president Erdogan used in describing Sunday's shooting massacre in Orlando, Florida.

The newspaper, Yeni Akit, which has supported Al-Qaeda in the past and is known for its hate speech against LGBT groups, Jews and Christians put up the news with the headline 'Death toll rises to 50 in bar where perverted homosexuals go!'

The newspaper and website have received backlash on social media as people feel the exclamation mark used at the end of the sentence signifies jubilation or excitement at the news rather than condemnation.

The paper, whose name means 'New Agreement, is also known for having strong links to Erdogan, in a country where press freedom is being heavily restricted by his government.

Yesterday, 50 people were massacred in a gay club at Orlando by a terrorist, the largest mass killing on American soil since the 9/11 attacks.