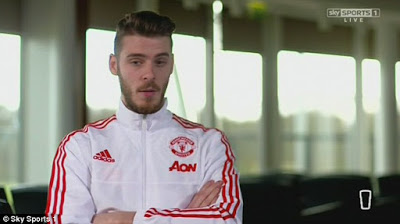 One of the world's best goalkeepers David De Gea was yesterday linked to a sexual assault scandal. De Gea denied the reports calling them 'lies'. If you missed the stor

Top Spanish paper El Confidencial has published the Whatsapp conversations between the protected witness (prostitute girl alleging De Gea forced her to have sex with teammates) and David de Gea, Manchester United and Spain keeper. Read the full English translation of the whatsapp chats between De Gea and the prostitute after the cut.

Witness: I wanted to ask you something :)

Witness: Do you remember when we went to the hotel when you were there with Muñiain and we went with torbe to the room?

Well it turns out I've got a date with a really nice guy and I'd like to know the name of the hotel.
Do you remember

De Gea: I wasn't at that hotel. You're confused, Muniain was with another guy, it wasn't me

Witness: Torbe told me That it was you

Witness: The guy was injured

De Gea: It was someone from Muniain's team Not me. Haha

Witness: And who was the guy then?

De Gea: But it wasn't me hahahaha. I wasn't there

Witness: I'll ask him. He said it was you. Haha

Witness: And the thing in Manchester. He mentioned it. Is it true

De Gea: No I'm doing it for my team mates hahaha

De Gea: I see that

Witness: haha. And do any of your teammates fancy me? Apart from you obviously. Hahaha

De Gea: Yessss. But can you cope with them all??

Witness: How many are there?