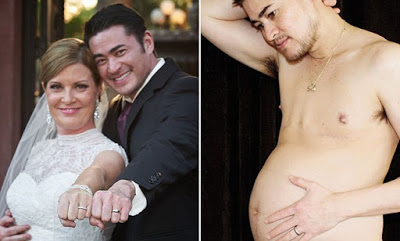 Thomas Beatie who made waves as the first 'pregnant man' has remarried. He's now married to his kid's preschool teacher, Amber Nichols.
The 42-year-old who was born a woman, underwent gender reassignment surgery in 2002.
After realizing that his then-wife Nancy, a bodybuilder, was unable to have children, Beatie became pregnant through artificial insemination and he stopped his daily hormone treatments during the fertility process.


Picture above: With first wife Nancy and his 3 children

He then gave birth to three children back to back and stopped, 2 boys and a girl.

Beatie and his wife Nancy, eventually went through a"bitter"ť divorce after claims of domestic violence. Beatie claimed Nancy always assaulted him and that he couldn't do it anymore. The divorce then dragged on for nearly three years and was finally settled in 2015 after Beatie agreed to give Nancy his prized shark tooth collection.

During the messy divorce, Beatie became romantically involved with his kids' preschool teacher, Amber Nichols. After months of dating, they decided to get married.
In an interview with the Daily Mail, Beatie claimed that he'd always wanted a big, white wedding. He said:


"I was so nervous, excited and frightened all at the same time."ť
"When Amber walked down the aisle my breath was just taken away. I saw the boys and Susan, so excited as a flower girl, and I just started crying and I couldn't stop. It was perfect - even better than I ever imagined."ť