Man dies in Thailand after wild sex romp with a transgender 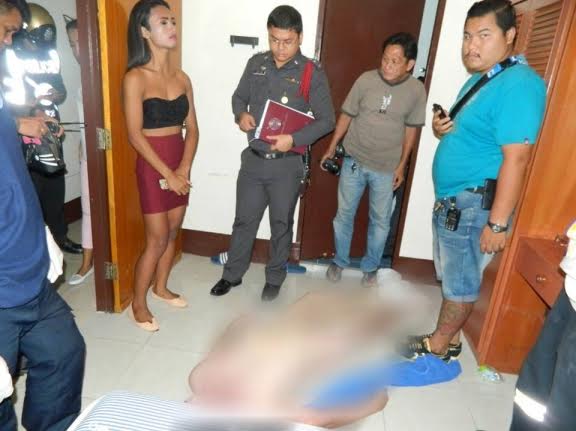 A foreigner died in the early hours of Sunday morning, May 15 after hitting his head on a wall during a wild romp with a ladyboy (pictured with the police) in a Pattaya hotel. For those who don't know, Ladyboy is a Thai term that refers to either a transgender woman or an effeminate gay male in Thailand.

Authorities were alerted to the death at around 5am on Sunday morning and when they arrived at the second floor room of the short time hotel just off Walking Street. They found the naked body of an unidentified male, thought to be aged between 40-45, laid naked on the floor.

Also present was a 22-year-old ladyboy from Buriram who told investigators the couple had met earlier on Walking Street and had agreed a fee of 3,000 baht for short time sex.

The unnamed ladyboy said the man was very drunk and rather wild when it came to doing the horizontal mambo. She said that during their moment of passion the man banged his head on the wall and fell to the floor.

The body was sent for autopsy and police are now trying to identify the man.

Investigators said the man likely tripped due to his intoxicated state causing him to injure himself, however, they will await the results of the autopsy to determine the exact cause of death before questioning the ladyboy further.