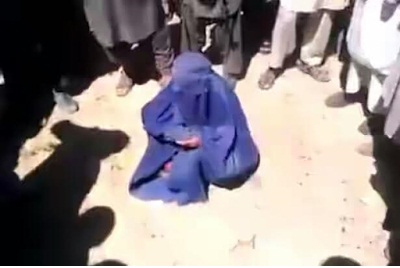 Video released online by terrorist channels shows the harrowing moment is woman is executed by the Taliban with a shot to the head after being convicted of killing her husband by a kangaroo court. She is seen sitting on the floor in a blue burka while crowds cheer on calling for her execution. Present in the crowd were members of her husband's family.

It is believed the executioner is the Taliban chief of the district where the chilling scene unfolded.