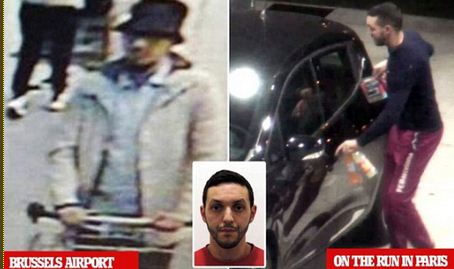 The 31-year-old, wanted for his role in last November's attacks in Paris, is thought to be the man captured on CCTV alongside Belgian brothers Ibrahim and Khalid El Bakraoui, according to the Belgian newspaper Sudpresse. After the two bombers had successfully detonated their bombs, Abrini was caught fleeing the scene, wearing beige summer clothes and a blue hat, having failed to set his own device off.  Abrini, pictured, is thought to have played a major role in organising this week's terror attacks in Brussels, which killed 31 people and injured hundreds more. The Belgian of Moroccan origin is known to have travelled to the UK last year, visiting Birmingham where he took photographs of an unidentified football stadium while his Islamic State cell began planning the attacks in France
Leave a comment...