HOW I SUDDENLY STARTED LOVING IGBOS. THE MYTHS 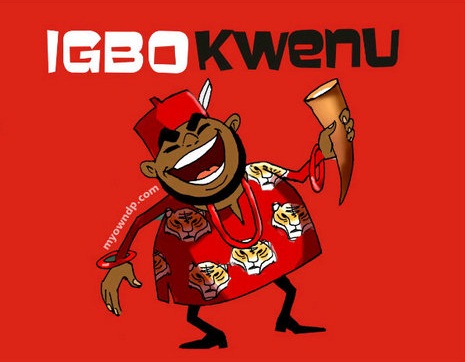 As a boy growing up on the street of Port Harcourt, I was told so many horrible things about Igbos. I was told that Igbos were planning to push Rivers people to Abia State for the people of Abia to inhabit Rivers State because of our resources.
I was told that Igbo people enslaved and ruled over my people in Bori the traditional headquarters of Ogoni Kingdom.

I was told that Odumegwu Ojukwu, Onyeka Onwenu and other prominent Igbos brazenly rejoiced over the execution of my uncle Ken Saro Wiwa because of the role he played during the Civil War. I was told that it is better to be slaves to Hausas than to be brothers to Igbos because, Igbos are worse than Hausas.

THE EFFECTS
These things made me to terribly detest Igbos beyond what you can imagine, I was always skeptical, cynical and suspicious while dealing with Igbos. It also affected my friendship with Igbo guys, I was always careful not to be a victim, no matter how they
value the friendship, as long as they are Igbos, they were bad eggs to me . It also severely affected my relationship with Igbo
girls, 70% of the girls I have seen are Igbos girls but I have never treated any of my Igbo girlfriends fairly because, I programmed my mind not to be interested in anything beyond the fun attached to the chemistry of boys and girls stuff while dealing with an Igbo girl, I didn't want to make the mistake of dating an Igbo girl to the extent of marrying her.

THE DISCOVERY.
I was posted to Akwa Ibom State for my national youth service in November 2013, there I made so many Igbo friends, almost 60% of Akwa Ibom corps members are from Igbo extraction, mainly from IMSU, FUTO, ABSU, UMUDIKE, ESUT and IMT. There I saw how determined a typical Igbo youth is, there i saw the natural tendency for economic success in a typical Igbo guy, there I saw the reason why Igbos are entrepreneurs allover the globe, there I saw that God specially gave them the metaphysical eyes to see money in things and where you don't even think of smelling money, there I saw that even though the Igbos have had severe political travails and marginalization, they will forever remain the economic salt of Nigeria, even after the restoration of Biafra.

While we were serving, those of us who are Port Harcourt breed UNIPORT/RSUST corps members were always complaining that Akwa Ibom is beautiful but not groovy as Port Harcourt, we were always complaining that the town is dry with no night life as
Port Harcourt. But our friends from the Igbo extraction were seeing things differently, they saw Akwa Ibom as a beautiful virgin land highly in need of economic exploration, they saw huge business opportunities in where we saw boredom.

At the end of my service year, I said I was going back to Port Harcourt because I believed Uyo was too dry for me to hustle, but my Igbo friends stayed back because they saw Uyo as a land lacking business and as such, it's good for them to make money through the introduction of different businesses.

THE REVERSAL.
I came back to Port Harcourt then pondered on my experience with these Igbo brains, I then realised why people hate them, I felt bad seriously for wrongly hating them all these while, I decided to love them because, they have the kind of zeal I'd love to
emulate.

THE CONVICTION.
When I was fully convinced that the Igbos are not only my role models but my blood was when they went against all odds to make Goodluck Jonathan heir own, they loved him even more than some us from the South South, they gave him their full support at the poll not minding the consequences. Ever since, I couldn't stop loving Igbos but to love them even more.

THE RECOMMENDATION.
Igbos drive the economy of every towns and cities in Nigeria, nobody can change that, so instead of hating them for doing business in your place, I'd advise you compete with them even if you know you can't beat them because, it is your land that is benefiting economically and otherwise with such healthy competition, it is a win win situation.

IN CONCLUSION.
Igbos are subject of hate in this country, apparently due to wrong perception, but I personally think Igbos are cool like any other tribe, and bad like any other tribe too. Though my main problem with them is that, they never admit their flaws no matter how glaring but they are always quick to lampoon the slightest folly of other tribes.