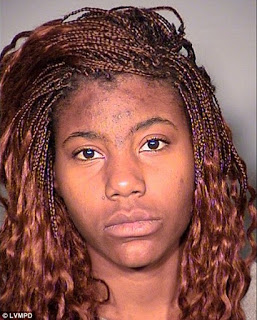 Lakeisha Holloway, 24, told authorities she was stressed out after being chased by security guards from parking lots where she had been trying to sleep before the crash, according to a police report obtained on Monday.
She had arrived in the Nevada city from Portland, Oregon, with her 3 year old daughter about a week ago, and had been living inside her 1996 Oldsmobile car, parking it at garages throughout the city, Clark County Sheriff Joe Lombardo said.

At a press conference at 10am PST on Monday, Clark County District Attorney Steve Wolfson said initial charges include murder with use of a deadly weapon as well as multiple counts of attempted murder with a deadly weapon, child abuse or neglect and failure to remain at the scene of an accident.
He said: 'When a person drives a 2,000-pound-plus motor vehicle intentionally onto a sidewalk, killing and injuring scores of people, that's murder.' Holloway is being held without bail at Clark County Jail.
While the motive remains unclear, Sheriff Joseph Lombardo said he does not believe the incident was a case of terrorism. However, he said he was not able to absolutely rule out terrorism at this stage due to a lack of information about the suspect.
Authorities said people jumped on the car and banged on its windows as it plowed through pedestrians on the sidewalk.
Lombardo told reporters that Holloway was stoic and didn't appear to be distressed when she was arrested. He said she told a valet at a hotel to call 911 after she mowed down people on Las Vegas Boulevard.
He added Holloway had made statements about her motive at the scene, but was 'not comfortable' with divulging those comments. However, he insisted that those statements did not suggest the motive was terrorism.

Authorities said they were struggling to piece together Holloway's background. She changed her name to Paris Paradise Morton in October, according to Oregon court records.
He said Holloway had alluded to a 'disassociation' with the father of her child, who is now in protective custody.

Holloway told authorities that she had been in Las Vegas for around a week, Lombardo added, and police believe she was living in her vehicle with her daughter. Lombardo said she was thought to have been passing through Las Vegas on her way to find the child's estranged father in Texas.

According to TMZ Holloway is a model, who was in Sin City for work. She had just started a clothing line, but it is not clear if she was modeling her own lothes or picking up work elsewhere.
Earlier on Monday, Clark County Coroner John Fudenberg identified Valenzuela, 32, of Buckeye, Arizona, as the woman who died. The coroner said the suburban Phoenix woman was visiting Las Vegas with her husband. The couple had celebrated their ten-year wedding anniversary earlier this month.
A cause of death is pending, with an autopsy scheduled for Monday.