Very Common Fruits but You Probably Have not Heard of Them 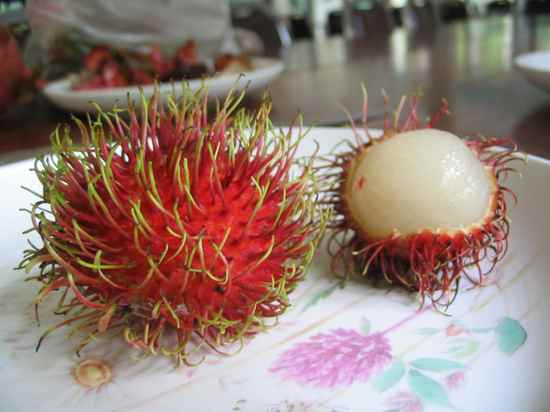 Medical professionals and dietitians will often say that, if you want to experience the wholeness of wellbeing, make fruits your best buds. There are quite a ton of advantages that come with eating fruits, and bingeing on them can never be regarded as too much. While there is this thing called food intoxication --which usually occur when we eat too much food, fruit intoxication on the other hand is quite a rarity. Because no matter how much you eat fruits, you still leave your immune system begging for more. When we are ask to mention the types of fruits we know, it is very easy to quickly remember, banana, apple, pineapple, mango, cherry etc. well, our little brain is not to blame though...It only recalls what its familiar with.
You think you are a fruitarian, perhaps a fruit savvy who is quite familiar with all things fruits, read on to discover some really exotic fruits that exist but you probably have not heard of them.
Platonia
Platonia also called Bacuri is a fruit found predominantly in South America, usually in the rainforest of Brazil, Paraguay, and Columbia. The fruit is round to oval in shape, with a thick yellow skin like that of Papaya. It can be made into several condiments and can be enjoyed as beverages too. It has a lot of medicinal benefits because its oily brown seed do so well as a remedy for skin diseases.
Cocona
Cocona is another fruit whose origin can be traced to South America. It has the features of a berry which actually makes it one of the closest cousins of tomato. The fruit comes in red, orange or yellow, depending on the variety. It is said that locals who cannot access tomatoes, choose cocona as an alternative because of their close relationship.
Jabuticaba
Jabuticaba is the closes alternatives to grape. It is said that if you cannot reach for grape, reach for Jabuticaba. Virtually all the enjoyments you can get from grapes can also be gotten from this fruit. The fruit is sweet and can be eaten like that or can be made into wine or liqueur. A very distinctive feature of this fruit is the way it grows. While other fruits grows around their leaves, the Jabuticaba fruits from its trunk. It ferments very quickly, making it a good source of alcohol.
Morinda
The fruit should not be confused with 'Moringa' because of the tricky name. Popularly called Noni is the morinda fruit. This fruit according to fossil records, has been existing for over 50 million years. It is not usually a fruit people patronize because of its repulsive odor, but it holds the record of being a saving grace in time of crises...reason why it is sometimes called the "starvation fruit". Which implies that it was used by indigenous people as an emergency food during famine in the olden days. The fruit is a key ingredients in many medicines and cosmetics.
Miracle Fruit
The miracle fruit is a very strange fruit native to West Africa. What makes the fruit so strange is that after eating it, every other thing you eat magically becomes sweet even if those things were bitter originally. The reason behind this magic according to scientist, is because of a particular compound the fruit contains known as 'Miraculin', a glycoprotein that serves as a taste modifier. It is said that miraculin has a way of altering the taste buds and taste receptors, so that every other thing you eat, the brain automatically interprets it as sweet. There have been some controversies about this fruit though. In the 1970s, attempts were made to commercialize and sell the fruit as a diet aid in the US, because of its potential to turn any meal sweet without affecting the calorie intake. However, these attempts were frustrated when the FDA declared it a food additive. The FDA actually did that due to pressure from sugar companies who could foresee big losses in profits. But it is said that the fruit is gradually making a great comeback due to the infamous things that sugar is now causing to the society.
Leave a comment...