Most Expensive Paintings In the World that Made History 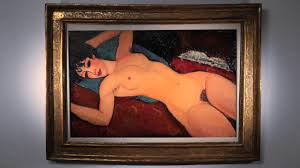 Below are the most expensive paintings in the world which are very famous and at the same time made history.

Salvator Mundi is a painting made by Italian Renaissance artist Leonardo da Vinci. It was sold for $450.3m (€382m).

Interchange, also known as Interchanged, is an oil on canvas painting by the Dutch-American abstract expressionist painter Willem de Kooning -it was completed in 1955 and sold for (€254m)

The Card Players is a series of Impressionist paintings by the French modernist Paul Cezanne. One of his most ambitious projects, now seen as an important contribution to the world of modern art. It was sold for c.$250m (€212m)

Number 17A is a painting by Jackson Pollock, an American painter known for his contributions to the abstract expressionist movement. Sold for c$200m (€169.8m)

No. 6 (Violet, Green and Red) is a painting by the Russian-American abstract expressionist artist Mark Rothko. It was painted in 1951. In common with Rothko's other works from this period, No. 6 consists of large expanses of colour delineated by uneven, hazy shade. Sold for $186m (€157.9m.)

Les Femmes d'Alger is a series of 15 paintings and numerous drawings by the Spanish artist Pablo Picasso. Sold for $179.4m (€152.3m)

Nu couché is a 1917 oil on canvas painting by the Italian artist Amedeo Modigliani. It is one of his most widely reproduced and exhibited paintings in history. It was sold for $170.4m (€144.6m)