This is What You Don't Know About Milk And Honey 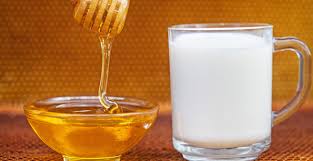 Many traditions and religion believed that honey and milk is a medium through which the Creator brings joy and peace to his people and to the world. However, to be frank and realistic without being metaphorical, milk and honey are worth exaggerating about, because these two things together can do a lot of wonders, they have been proved to have a lot of health benefits that if we are to list them out, will be in-exhaustive.

To be brief, here are some of the health benefits of milk and honey you need to know.

Have you been craving for a healthy glowing skin? then the combination of milk and honey could hasting your dreams and make it a reality.

Both honey and milk have been shown to possess antimicrobial and cleansing properties. They have been a recipe in making many creams for skin treatment, skin soothing and spa. Aside taking them orally one can as well enjoy a warm bath of milk and honey, by mixing them in equal quantities in water. This would be so lovely.

Milk and honey are very essential in the production of probiotics. Prebiotics are nutrients that stimulate the growth and development of micro floras, which are bacteria found in the guts of animals. Micro floras brings about effective digestion in animals, eradicating a number of digestive complications such as constipation, bloating, heartburn and other digestive irregularities and mishaps.

Calcium is a very essential mineral that bring about proper bone formation. It is found abundantly in milk but however limited in honey, but the good news is that honey provides an enabling environment for the absorption and utilization of calcium. So taking both of them together provides the body with the optimum requirement of calcium needed for proper bone health- in order to prevent malformation of the bones and osteoporosis.

Insomnia is the inability of getting a proper sleep. Honey and milk have both been used as remedy and alternative medicine for insomnia. Honey is one of the rare sugary foods causing a controlled increase in the amount of insulin being secreted, which also promotes tryptophan to be released into the brain.

Tryptophan is normally converted into serotonin, which induces a feeling of relaxation. and serotonin is commonly converted to melatonin, a very effective substance that boost sleep.

People in many ancient civilizations, including the Greeks, Romans, Egyptians, and Indians, drank milk and honey to preserve their youth.  It is thought that the combination of milk and honey impacts the whole body, by making it agile and youthful. Since milk and honey can help ensure a long life, their combination was known as “the elixir of life.”

The antioxidant properties that occur when milk and honey are combined are great; antioxidants attack the free radicals, one of the primary causes of skin degradation, wrinkles, and blotches.

No wonder, a lot of people usually imagine themselves bathing in a pool containing just milk and honey alone - what an awesome feeling that would be.