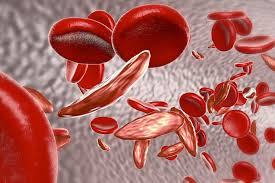 Genetic diseases are diseases that are caused due to the faults in the genetic makeups, such as mutation. They can be passed from one generation to another. Carriers of some certain genetic diseases have been shown to be resistance to other diseases due to their mechanism of action.

Below is a few list of some certain genetic diseases that can prevent other diseases from thriving.

Niemann-Pick is a disease where cholesterol abnormally accumulates within lysosomes in a cell. The cholesterol accumulates due to the shortage of a specific protein called NPC1, which is responsible for transporting cholesterol in and out of the lysosomes. This protein has an affiliation with Ebola virus, the virus tend to be more potent in the presence of this protein, however, any patient suffering from Niemann-Pick disease is less likely to be infected with Ebola since the patient is going to lack the NPC1 protein in their cells.

Sickle cell anemia is a genetic disease that make the sufferer to develop an abnormal red blood cell. A healthy red blood cells are biconcave in shape, but an anemic person has a red blood cell that is sickle in shape which prevent the effective transportation of blood and effective flow ofoxygen. People who are carriers of the sickle-cell gene have been proven to be more resistant to malaria.

Tay-Sachs disease is a disease that destroys neurons in the brain and spinal cord. Carriers of this disease usually have a gene that fights against Mycobacteria tuberculosis, a bacteria that causes tuberculosis. Tay-Sachs carriers produce a certain subunit of the enzyme hexosamindinase, this enzyme helps to prevents the growth of this tuberculosis causing bacteria thereby preventing tuberculosis from occurring in the long run.

Cystic fibrosis is a genetic disease that causes channels in the respiratory system to be blocked with thick mucus. This mucus build up in the lungs creating an environment for bacteria to grow and multiply thereby causing damages to the lungs. Carriers of cystic fibrosis have been shown to survive Vibrio cholerae, which is a very deadly form of cholera.